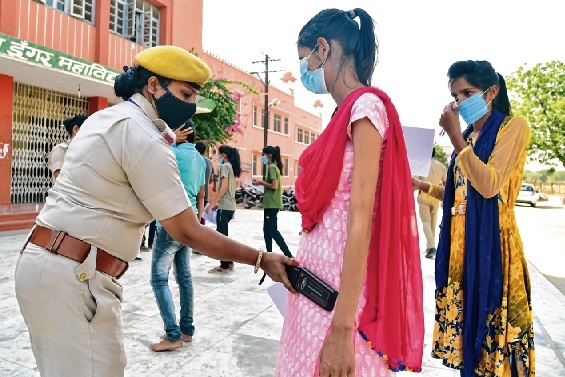 On Sunday, a police recruitment exam was conducted at an institute in Boisar and Pise was posted as a coordinating officer. | -ANI

A 21-year-old man has been booked in a cheating case by the Boisar police in Palghar for allegedly using an electronic device to copy during a police recruitment exam.

The complainant in the case is assistant police inspector SS Pise, who is posted with the Local Arms Division of the Mumbai police.

On Sunday, a police recruitment exam was conducted at an institute in Boisar and Pise was posted as a coordinating officer.

The candidates were only allowed to take their admit card, original ID card, pens, sanitiser, and transparent water bottle inside the exam centre.

They were informed not to take along mobile phones, electronic devices with Bluetooth.

The candidates were frisked and were made to wait in the garden area of the institute. They were then checked using the metal detector, the police said.

A police officer said that during the checking, a constable suspected one of the candidates, RS Dobhal, a resident of Khodegaon in Aurangabad, to be carrying some prohibited material.

Two panch witnesses were called and during thorough frisking of Dobhal, the police recovered a mobile phone with a SIM card and a specially designed communication device from him.

The said device also had a SIM card in it. On questioning, Dobhal admitted to planning to use them to copy in the exam.

A case has been registered under sections 420 (cheating and dishonestly inducing delivery of property) and 511 (attempting to commit offences punishable with imprisonment for life or other imprisonment) of the Indian Penal Code.

In October, the Jalgaon police had arrested one Pratapsingh Balod, a resident of Sanjarpur in Aurangabad, for allegedly trying to cheat in a police recruitment exam using a communication device.