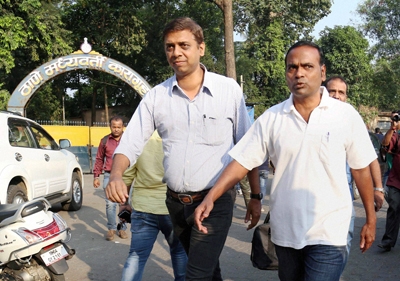 Mumbai : The Maharashtra government has stayed the jail sentence of the 11 cops, convicted in the Lakhan Bhaiya fake encounter case of 2006, for six months, prompting to their immediate release.

The policemen were convicted by the Mumbai Sessions Court in July, 2013, and are currently serving life imprisonment at the Thane Central Jail.

Following the decision, all the 11 convicts will walk out of the jail with immediate effect. According to a circular issued by Home Department on Wednesday, the stay for six months will start from the day, the convicts walk out of the prison. The conditions also said that the convicted cops will not meet witnesses in the case and family members of Ramnarayan Vishwanath Gupta alias Lakhan Bhaiya to intimidate them. They will behave well and not commit any crime during the six-month period.

Lakhan Bhaiya was considered to be underworld don Chhota Rajan’s close aide. Four days after his killing on November 11, 2006, his brother moved the Bombay High Court alleging that Bhaiya was killed in cold blood by the Mumbai Police. “The convicts will have to surrender their passports and personal weapons in the police station. If they want to convert or change their names during the six month period, prior permission of the government will be required. The government will have the powers to lift the six month stay without informing the convicts. “Similarly, if the High Court upholds the Sessions court verdict against them, the six month stay will be lifted. Also, the government can cancel the stay if the convicts violate any of the conditions,” the circular said.  The 11 convicts include — Dilip Sitaram Palande, Nitin Gorakhnath Sartape, Ganesh Ankush Harpude, Anand Balaji Patade, Prakash Ganpat Kadam, Devidas Gangaram Sakpal, Pandurang Ganpat Kokam, Ratnakar Gautam Kamble, Sandeep Hemraj Sardar, Tanaji Bhausaheb Desai, Vinayak Balasaheb Shinde.

It said that all the convicts had made an application to the government about granting them relief.

The government before taking a decision on the stay on the jail sentence, sought opinion of the Sessions court, National Human Rights Commission, collector and district magistrate Mumbai suburbs, Police Commissioner of Mumbai and IG prisons. PTI