The bench in its orders noted that it had issued notice to the state government and its authorities to respond to the issue in September this year.
Narsi Benwal 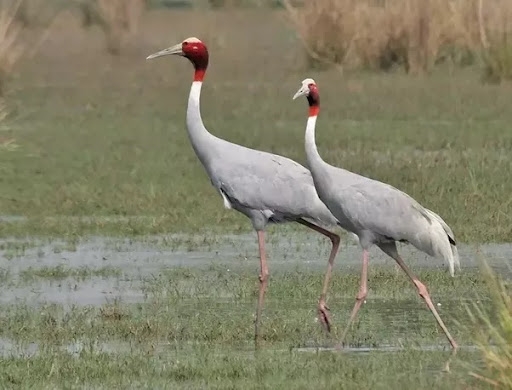 Observing that the conduct of the authorities in Maharashtra aren't the same as that of their goal to preserve and conserve the environment, the Bombay High Court at Nagpur bench recently pulled up the authorities for failing to file a reply to a plea highlighting the "serious threat" to the existence of Sarus Crane birds, which are world's tallest flying birds.

A bench of Justices Sunil Shukre and Anil Pansare was hearing a suo motu PIL it took up earlier this year regarding the issue of the existence of Sarus Crane birds, which at present are only found in Gondia and Bhandara districts of Maharashtra.

"This petition has brought to the fore an important issue relating to the survival of Sarus Crane as a bird species in India. The petition gives details of the dwindling habitat of Sarus Crane and the challenges faced by the authorities in conserving and protecting this species of bird, which is stated to be the tallest flying bird in the world," the judges noted.

The judges further noted that even the small habitat of these birds in Gondia and Bhandara is now under serious threat.

They further took note of a recent news item regarding the carcass of one such bird found near Paraswada Lake, Gondia.

this bird, if alive, would also die as these birds are known to live in pairs with the same partner over the whole life. It is not known as to what is causing the death of Sarus Crane," the judges noted.

"This loss, in our opinion, is a further blow to the dwindling

the population of Sarus Crane birds," the bench observed.

The bench in its orders noted that it had issued notice to the state government and its authorities to respond to the issue in September this year.

"In a matter like this, it was expected of the respondent's authorities representing the state to file their reply promptly but, they have not," the bench noted along with the fact that the government counsel didn't attend the hearing and that other counsels weren't aware as to why the reply wasn't filed.

"None of these authorities are present before this Court. This approach, on the part of the authorities, we are pained to note, is not consistent with the goal of conservation and preservation of environment and forests," the bench observed.

Accordingly, the judges ordered the authorities to remain present in the next hearing and also to file their response by January 5, 2022.