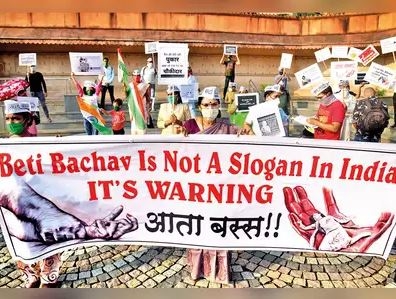 The state Cabinet on Wednesday, in a bid to curb violence against women and children, cleared two bills The Maharashtra Shakti Criminal Law (Maharashtra Amendment) Act 2020 and the Special Court and Machinery for Implementation of Maharashtra Shakti Criminal Law 2020. Among the key provisions in these bills include the death penalty in serious cases of rape, acid attack and child abuse, acid attack to be non-bailable offence with imprisonment not less than 10 years which may be extended to natural life with fine to be payable to the victim or with death with heinous offences. The fine would be levied up to Rs 10 lakh to help the victim with plastic surgery and facial reconstruction. It also includes gang rape, rape by a person in authority, rape on woman below 16 years and 12 years which attracts similar punishments.

These bills with stern actions will be tabled in the winter session of the state legislature slated for December 14 and 15 in Mumbai. The Shakti Act has been framed on the lines of the Disha Act enacted by the Andhra Pradesh Government.

Some of the other provisions include punishment for threatening and defaming women through social media. Interestingly, the social media, Internet and mobile service providers have been brought under the purview of these laws as they will face action for non-cooperating in the investigation.

Besides, the public servants will face action for their non-cooperation with probe and the proposed legislations have proposed the restrictions on printing the name of a rape victim and also victims of molestation and acid attack.

A new judicial system has been proposed including the establishment of 36 special courts for speedy disposal of cases with regard to violence against women and children. The government will appoint a special government prosecutor for each special court.

Further, a Special Police Squad (District Superintendent / Commissionerate) consists of at least one female officer will be set up to investigate crimes against women and children in each unit.

In order to help and assist the victims, the government will notify charitable organisations.