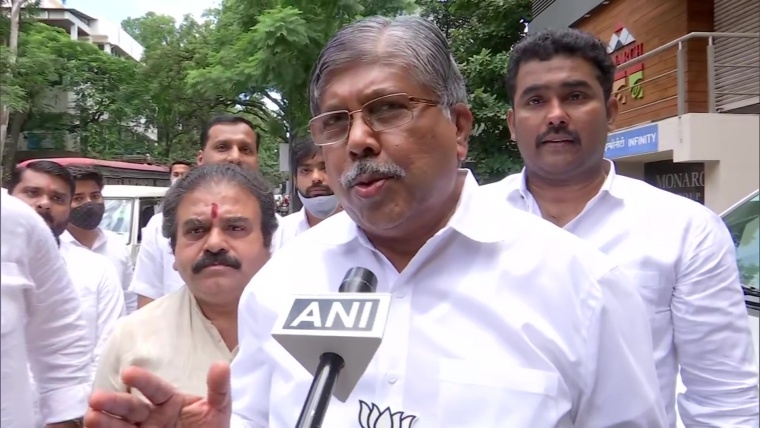 Maharashtra BJP chief Chandrakant Patil while commenting on Union Minister Narayan Rane's remark on chief minister Uddhav Thackeray said, "I don't support Narayan Rane's statement but if he's arrested or arrest warrant is issued against him for remarks against CM, what's happening to their leaders who comment against Governor, a constitutional functionary, almost daily."

Further taking a charge at the MahaVikas Aghadi government he said that the arrest warrant against Rane shows that the state govt is scared. "This is a political rivalry," he added.

On the other hand, Shiv Sena MP Vinayak Raut demanded that BJP leader Narayan Rane should "show some respect for the Constitution" and step down as Union minister after being arrested. "If there is any shame left in Rane, he should submit resignation. He should show some respect for the Constitution. What he said was despicable and chief minister Uddhav Thackeray has ignored him, but he will have to face action for the words he uttered." Raut also claimed that the support for Rane's Jan Ashirwad Yatra -- during which he made the statement -- had been orchestrated.

"But that support went to his head and he became uncontrolled. Rane was making controversial comments chiefly because of it," he said.

I don't support Narayan Rane's statement. But if he's arrested or arrest warrant is issued against him for remarks against CM, what's happening to their leaders who comment against Governor, a constitutional functionary, almost daily: Maharashtra BJP chief Chandrakant Patil pic.twitter.com/eYHeG5QWrt

Today, a sessions court in Ratnagiri rejected the transit anticipatory bail application of Rane while the Bombay High Court has also refused to grant urgent relief to Narayan Rane who had sought quashing of the multiple FIRs filed against him.

In a day of fast-paced developments, a team of police personnel went to Rane's camp in Sangameshwar in Ratnagiri in the Konkan region, whisked him off to a waiting vehicle and took him to the local police station for the other arrest-related formalities amidst tight security.

The sensational happenings came barely a couple of hours after Rane sharply dared that "nobody could do anything to him" or prevent him from "moving around freely".

Rane, whose health seemed to have deteriorated as he suffered from diabetes and hypertension, underwent a preliminary medical checkup and is expected to be taken to Nashik later.

The stunning arrest of Rane - a former Shiv Sena Chief Minister - is likely to trigger further bitterness with the party's former ally, BJP, which went on a downslide after Thackeray joined hands with the Nationalist Congress Party-Congress to head the Maha Vikas Aghadi (MVA) government in November 2019.