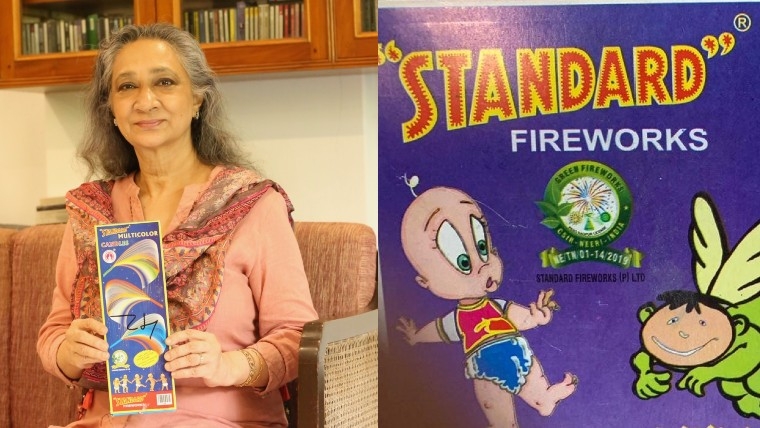 How green are those 'green' crackers? NGO Awaaz Foundation finds out |

With Diwali round the corner, the Maharashtra Pollution Control Board (MPCB) and NGO Awaaz Foundation tested firecrackers for compliance with noise standards at RCF ground in Chembur on Thursday evening.

Around 30 types of crackers — from different manufacturers available in the local market— were tested and the noise levels were found to be within the permissible limits except for two of them.

"Two crackers violated permissible noise limits which is a huge reduction from previous years. Many of the green crackers did not have percentages of chemical content and need further investigation to check for safety levels," said Sumaira Abdulali, founder and convenor of Awaaz Foundation.

However, the levels of air pollution caused as a result of bursting them will continue to be high as there are no parameters to keep it under check. According to MPCB and Awaaz Foundation, the analysis will give citizens an idea of how harmful a firecracker is, so they can decide which ones to buy.

The noise standards for fire-crackers — notified by the Environment (Protection) Rules, 2006 — state that the manufacture, sale and use of fire-crackers generating noise levels exceeding 125 decibels at 4 meters distance from the point of bursting are prohibited.

Abdul Ali said, "Last year, amid fear of the second wave of covid-19, firecrackers were banned by the BMC."

She added, "This year, there has been no official announcement from the Government of Maharashtra or BMC so far, but all types of crackers are available in the market. Awaaz Foundation procured 16 varieties of ordinary crackers and 14 varieties of green crackers for testing."

The civic body in its circular banning the bursting of crackers last year stated that the number of cases has gone down in the last two months, so has the death rate across Mumbai.

The hazardous chemicals from bursting firecrackers and even noise will make the effects of deadly Covid-19 even more harmful. We all need to understand our responsibility and contribute to society.

Awaaz Foundation and the MPCB have tested firecracker noise levels jointly since 2004. In the early years, 100% of crackers exceeded maximum permissible noise levels. In 2010, the maximum level was 130.6dB(A), well beyond the World Health Organization's safe exposure limit and the legally permissible limit of 125dB (A).

In the years since then, due to the data made available to the public, government agencies and courts from the testing, noise levels have gradually reduced. In 2020, the Government allowed only ‘Green Crackers’ to be used after an Order of the National Green Tribunal. Green Crackers were developed by NEERI to reduce air and noise pollution and carry their stamp of approval.

Last year in November, Awaaz Foundation tested commonly available crackers in a private laboratory and compared the chemical composition with entries listed in Schedule I ‘List of Hazardous and Toxic Chemicals’ of Manufacture, Storage and Import of Hazardous Chemicals Rules 1989. She has then written to Chief Minister Uddhav Thackeray claiming the effects of these crackers will be even more dangerous amid the Covid-19 outbreak given the air pollution and negative effects they cause on respiratory health.