Cyclone Tauktae: All set to tackle cyclone if it hits Mumbai, says BMC 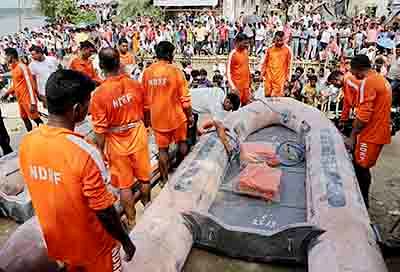 With increased chances of cyclone Tauktae hitting the Maharashtra coastline, the BrihanMumbai Municipal Corporation (BMC), on Friday, said that it has left no stone unturned to avoid any large scale catastrophe. In its statement, it said that it has pruned as many as 384 trees as a safety measure. Last monsoon, several instances of trees falling were reported in the city. As a result, civic officials have been working towards avoiding such a catastrophic situation.

"Most large and weak trees in the vicinity of COVID-19 care hospitals, jumbo centres and residential areas in the city and suburbs have been pruned by the civic body. In total, 384 trees have been pruned," said the body in its statement.

Alongside this, the civic body has readied all the temporary shelters and back up facilities, especially in the low lying and coastal areas in the western suburbs.

"We have informed all the officers at the ward level to activate shelters. If there is an adverse situation tomorrow, we may be able to shift residents living near the coast immediately," Suresh Kakani, additional municipal commissioner and in-charge of western suburbs in BMC, told the Free Press Journal.

Kakani also maintained that, as of now, BMC hasn't shifted any COVID-19 patients undergoing treatment; however, it is keeping all its means ready. "Incase there is a power outage or if the need arises, then we may shift patients to A nearby jumbo centre as a safety measure. We have kept all our means prepared," Kakani said.

When cyclone Nisarga had hit the city in June, last year, BMC had to shift 250 patients under treatment to the NSCI jumbo centre at Worli from the Bandra Kurla Complex (BKC) facility.

Kakani also mentioned that all hospitals and nursing homes have been notified to arrange for generators and inverters to ensure uninterrupted power supply in case there is an outage. Alongside this, BMC has also kept flood rescue squads and divers at standby.

Public representatives from various low lying areas have also reached out to residents living near the sea and fisherfolk. "We have reached out to the people living by the sea at Bandra and have informed them that we have activated a few shelter homes. If the tide is high, they can be shifted there easily," said Asif Zakaria, senior Congress corporator of Bandra.

HomeMumbaiCyclone Tauktae: All set to tackle cyclone if it hits Mumbai, says BMC