As per the 2018 Status of Tigers in India Report released by Prime Minister Narendra Modi on today, Maharashtra has more than 312 tigers of the total 2,967 estimated tiger population in India, bringing cheers to conservationists and activists.
IANS 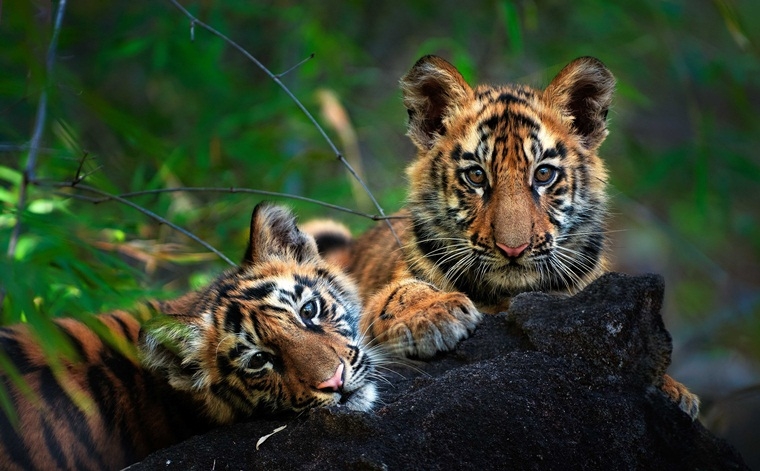 Mumbai: Though Madhya Pradesh and Karnataka have more tigers, Maharashtra has nearly doubled its tiger population since 2010, an activist said here on Monday.

As per the 2018 Status of Tigers in India Report released by Prime Minister Narendra Modi on today, Maharashtra has more than 312 tigers of the total 2,967 estimated tiger population in India, bringing cheers to conservationists and activists. The tiger population in Maharashtra has shown a consistent increase in the past 12 years, according to Kishore Rithe of Satpuda Foundation, who is a former member of Standing Committee of National Board for Wildlife.

"In 2006, the state had 103 tigers, it increased to 168 in 2010, climbed to 190 in 2014 and in 2018, the estimate is 312 tigers in the wild or nearly double since 2010," Rithe told IANS. According to Rithe, the biggest factors credited with the increase in tiger population in Maharashtra is the successful 'village relocation policy', zero-tolerance towards poaching and wildlife trade, besides wildlife staff recruitment and placing efficient officers to man the wildlife sanctuaries.

Maharashtra's Forest Minister Sudhir Mungantiwar, soon after the PM released the report on the occasion of Global Tiger Day, said that "tigers are the top of the ecosystem". "Let's plant more trees and secure the future of the tigers in Maharashtra," Mungantiwar said, adding the government has planned to plant 33 crore trees in phases across the state. Incidentally, the minister's home district of Chandrapur has the largest tiger population in the state.

The latest tiger census report has come as a morale booster for the state tiger conservation efforts against the backdrop of the killing of a man-eater tigress, Avni in November last year. The tigress, aged around five years with two cubs, was shot dead on Nov. 2, 2018 after she was found responsible for several human deaths in the Pandharkawada forests of Yavatmal district. Besides, Maharashtra has declared 11 new tiger sanctuaries/conservation reserves in the past eight years spread over 1,912 sq. km in strategic locations conducive to the breeding and safe dispersal of these striped cats.

This is the biggest such declared area for tiger sanctuaries anywhere in the country and includes the Navegaon-Nagzira Tiger Reserve in Bhandara-Gondiya (Dec. 2013), Bor Tiger Reserve in Wardha (July 2014), said Rithe. These in turn became the 46th and 47 tiger reserve in the country respectively, aiding the conservation efforts. Additionally, Maharashtra has systematically relocated around 30 villages from core tiger areas, including tiger reserves and provided an additional 3000 hectares for their safe, undisturbed breeding.

"Few states have implemented such village relocation programme with success involving around 4,900 families who are now leading a happy life with full civic amenities and market places, far away from the core tiger breeding area, Rithe added. However, there are other challenges which need to be tackled like accidental deaths of tigers, leopards, sloth bears and other wild animals in the state's forests, and though remedial steps have been taken, they are not enough. Rithe also expressed concerns over major infrastructure projects such as railway, highways, expressways, canals, power transmission lines within or nearby the reserves which continue to pose hazards to all wild animals.