Chinese TBM being used for tunnelling 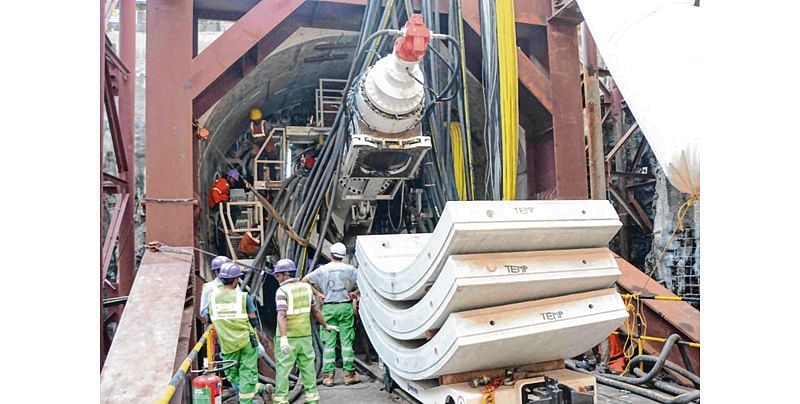 The TBM machine, manufactured by China Railway Construction Heavy Industry Company (CRCHI) is presently being stationed in the launch site at Priyadarshini Park, Malabar Hills. The TBM is owned by the contractors - Larsen and Toubro (L&T) and it arrived in Mumbai on April, 2020. Due to the massive size, the TBM was dismantled into smaller parts and were taken to the construction site on 17 trucks.

The BMC has reassembled the TBM to its full size and will now be using it to drill two parallel tunnels each covering 3.93 km distance between Malabar Hills and Girgaum. These tunnels will run 25 metres below the surface in Girgaum and 75 metres below the surface in Malabar hill. Each tunnel will be around 12 metres and will have 3x3 lanes on both the sides including one emergency lanes.

This tunnel will be a part of the 10 km stretch between Priyadarshini Park and Worli.

A senior executive engineer of the BMC involved with the project informed, that reassembling works of the TBM was started in September on the reclaimed land around 200 metres away from the present construction site.

"On Friday we transported the TBM to the launch ramp from the assembly site by using a 200 wheel self-propelled transporter and freight wings, at present the weight of the TBM is around 1,500 mega tons," the engineer told FPJ.

The official further informed that in the coming days, the machine will be lowered using freight wings following which it will be used for digging the tunnel.

"The total boring process will take around nine to ten months. We will start digging from the Priyadarshini Park site and carry out boring of the first tunnel till the Girgaum Chowpatty. From there the machine will be taken out and will be taken back to Priyadarshini Park side as we start boring the second parallel tunnel, boring of each side is expected to take five months" the official explained.

When asked if Chinese operators will be working on the project, the civic body stated that the ownership of the machine is with L&T and it is up to them to take the call.

The Coastal Road Project which aims to connect suburban Mumbai's Kandivli with Marine Drive is expected to be completed by 2023.