The list came as a shock to veteran Khadse. Since, he is one of the senior-most leaders of the party and its OBC face, it was expected that his name will figure in the list.
FPJ Political Bureau 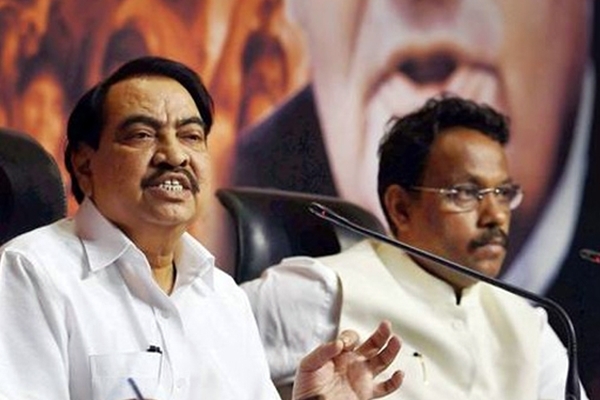 The list came as a shock to veteran Khadse. Since, he is one of the senior-most leaders of the party and its OBC face, it was expected that his name will figure in the list.

The legislator from Muktainagar got his fist jolt when Devendra Fadnavis became Chief Minister in 2014. Khadse was leader of opposition for a long time in the State Assembly and Fadnavis would then sit in the second row behind him.

The political tussle between the two, which erupted after Fadnavis was sworn in, eventually resulted in Khadse’s exit in a land scam. Though Fadnavis gave a clean chit to every other minister whose name figured in a scam, he did not do so in the case of Khadse.

Vinod Tawde, who was a face of the Mumbai BJP and a prominent Maratha leader, was also omitted. Tawde's performance as a minister was poor and his key portfolios were given to other ministers.

He is also considered an aspirant to the CM's post, which may have gone against him. The party is likely to field another candidate from his Borivali seat.

Prakash Mehta, who was housing minister in Fadnavis government till June 2019, was removed from the cabinet as he was indicted in a scam by the Lokayukta. His name, too, is missing in the list.

Fadnavis, meanwhile, will seek a consecutive fifth term from Nagpur South West while Chandrakant Patil, a two-time Maharashtra Legislative Council member, will make his Assembly debut from Kothrud in Pune.

12 women candidates have been nominated, including seven sitting MLAs.Kothrud legislator Medha Kulkarni was denied a ticket to accommodate state BJP president Chandrakant Patil, who is also a minister.

Though Patil belongs to Kolhapur, he would have found the seat a tough nut to crack. He was, therefore, searching for a safe seat. He landed in Kothrud which is one of the safest seats of the BJP. The constituency has more than one lakh Brahmin voters who support the RSS and the BJP.

Dilip Kamble, former minister of state and a Dalit face of the BJP, too, was denied a ticket and his brother Sunil Kamble has been nominated instead.

Sardar Tara Singh, legislator from Mulund, was denied a ticket as he has crossed the 75 year threshold. He was lobbying for his son Rajneet Singh but due to his connect with the scam-hit PMC bank, Mihir Kotecha has been nominated instead.

Narendra Pawar, the sitting BJP MLA from Kalyan-West, has been dropped as the seat has gone to the Shiv Sena.

Several leaders from the Congress and NCP who landed in the BJP in the run-up to the polls have been rewarded and given tickets.

Sandip Naik, who was elected in 2014 from Airoli on an NCP ticket and joined the BJP a few weeks ago, has been fielded from the same seat in Navi Mumbai.