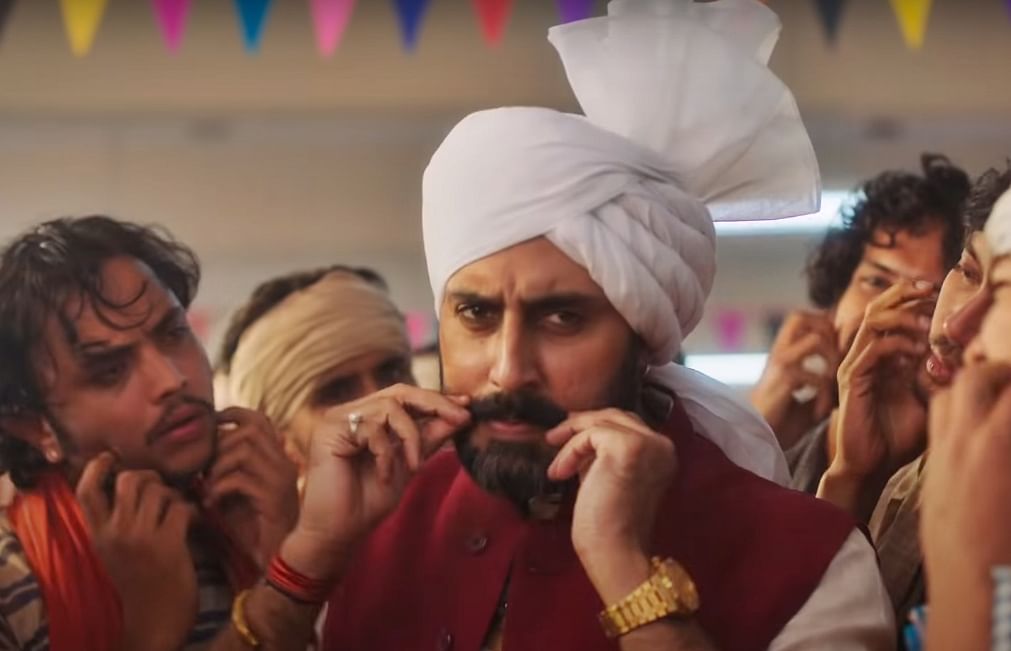 Ganga Ram Chaudhary (Abhishek Bachchan), the Chief Minister of an imaginary state Harit Pradesh, is merely 8th grade passed but yet privileged of law and order. He is corrupt, often ridicules his IAS secretary and preaches that education is a sheer waste of time. His wife, Bimla Devi (Nimrat Kaur), a devoted homemaker and a wife in every possible manner, takes care of the cattle and Ganga too. But when the curtain raises of Chaudhary’s sins, he is sent to judicial custody, and Bimla has to save Ganga’s crumbling pride. Things become difficult inside for Ganga when Jyoti Deswal (Yami Gautam Dhar), a new SP, joins the cell.

Will Ganga compromise on his fancy life in prison? Will Bimla Devi be able to save the sinking empire of Ganga or overrule her husband’s orders? This forms the crux of ‘Dasvi’.

Debutant filmmaker Tushar Jalota brings a mildly fun story of a popular politician couple loosely based on the life of Lalu Prasad Yadav and Rabri Devi with the twist of right to education law. However, he schemingly made ‘Dasvi’ with political jargon but loses the grip in portions. Tushar kept the momentum going on throughout but dipped post-interval with the pre-independent India gyaan. But again, he should be given a little concession since ‘Dasvi’ is a spoof with some great dialogues and one-liners by Suresh Nair and Ritesh Shah.

It seems like producers at Maddock Films are the flag bearer of the films based on the educational system in current times. After the late Irrfan Khan-starrer Hindi Medium’ (2017) and ‘Angrezi Medium’ (2020), ‘Dasvi’ is their third offering on a similar backdrop. Right to education is a human right, and they say it out loud in their films.

Abhishek Bachchan looks perfect in the demeanour of a jaat politician, with colourful saafas, a pointed moustache, stylish Nehru jackets and ironed kurta pyjamas. His Haryanvi dialect is amazing; with every performance of his, he proves that he is a director’s actor. Having been underrated for years, ‘Dasvi’ surely adds something to his acting resume.

Nimrat Kaur is splendid as a meek wife turned into a pompous politician. She should be seen more often on screen. Tushar thankfully didn’t see Bhumi Pednekar in this tailor-made role for her and cast Nimrat instead, thus breaking the stereotype. Yami Gautam Dhar is sincere as Jyoti Deswal. Though her strictness in body language and commanding tone don’t match her physicality, she is reasonably good. Manu Rishi Chadha is funny and acts like a filler in this satire.

‘Dasvi’ is entertaining and all about winning the battle with perseverance. The film might be a one-time watch, but how Tushar slyly dives into our nation’s shallow political and judicial system is surely something to watch out for.