Besides the two, former Indian Police Service (IPS) officer Sanjiv Bhatt is also an accused in the case

Ahmedabad: A court in Ahmedabad is likely to pass an order on Tuesday on the bail applications of activist Teesta Setalvad and former DGP R B Sreekumar arrested for allegedly fabricating documents to frame innocent people in the 2002 riots cases.

Setalvad and Sreekumar have denied the allegations made against them by a Special Investigation Team (SIT) probing the case.

Besides the two, former Indian Police Service (IPS) officer Sanjiv Bhatt is also an accused in the case.

The sessions court last week reserved its order after the arguments from both defence and prosecution came to an end on Thursday.

The three accused had been arrested by the crime branch, which lodged an FIR against them under Indian Penal Code Sections 468 (forgery for purpose of cheating) and 194 (giving or fabricating false evidence with intent to procure conviction for capital offence).

The SIT in its affidavit claimed the three accused were part of a "larger conspiracy" carried out at the behest of late Congress leader Ahmed Patel to destabilise the then Gujarat BJP government under chief minister Narendra Modi. 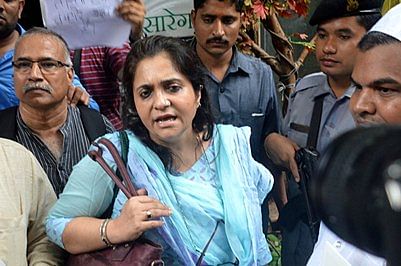