Mevani, a Dalit leader, said he will continue to fight for truth and the country.

Barpeta: Granting bail to Gujarat MLA Jignesh Mevani in a case related to the alleged "assault" of a woman police officer, a court in Assam's Barpeta district on Friday pulled up the state police for lodging a "false FIR".

Hearing the bail petition, Barpeta District and Sessions judge Aparesh Chakraborty also urged the Gauhati High Court to direct the state police force to "reform itself", referring to the slew of police encounters over the last one year.

Mevani was granted bail on a Personal Recognisance (PR) bond of Rs 1,000 in the case filed at the Barpeta Road police station.

Coming out of the court, he said that though a conspiracy was hatched against him, he has full faith in the judiciary.

Mevani, a Congress-backed Independent MLA from Vadgam in Banaskantha, was arrested in this case on Monday, soon after a court in Kokrajhar granted him bail in a case that was filed against him for tweeting Prime Minister Narendra Modi "considered Godse as God".

It is alleged that he assaulted the woman police officer when a posse of Assam Police was bringing him from Guwahati airport to Kokrajhar after arresting him on April 19 from Palanpur town in Gujarat.

Judge Chakraborty observed that the intent to outrage the modesty of the woman police officer in the presence of two other police officials cannot be held against the accused while he was in their custody and which nobody else had seen.

The judge noted that the high court may consider directing the Assam Police to reform itself to "prevent registration of false FIR like the present case and the police personnel firing and killing or injuring accused which has become a routine phenomenon in the state".

"Otherwise our state will become a police state which the society can ill-afford," it added.

Since May last year, 46 people have been killed and 112 others injured in police firings in the state. In all the cases, police said they had to open fire as the arrested persons either tried to flee from custody or shoot at them.

Judge Chakraborty also directed that the order be submitted to the Registrar General of the high court for placing it before the chief justice to look into this aspect and consider whether the matter can be taken up as a Public Interest Litigation (PIL) to "curb the ongoing police excesses in the state".

Speaking to reporters on his way out of the court, Mevani alleged his arrest was a "conspiracy" planned in the Prime Minister's Office (PMO).

"I have full faith in the judiciary. I had it in the past and it will remain so in the future. I would have definitely got bail, if not today, then tomorrow," he said.

"The BJP government and Prime Minister Narendra Modi could not arrest Nirav Modi, Mehul Choksi or Vijay Mallya but for a tweet, Jignesh Mevani is arrested and brought thousands of kilometres from Gujarat to a jail in Assam. What is the message he is trying to give?" he added.

Mevani, a Dalit leader, said he will continue to fight for truth and the country.

"I was targeted by the BJP just like they did with Chandrasekhar Azad, Akhil Gogoi, Hardik Patel, Kanhaiya Kumar and other youth leaders but none of us have stopped speaking against the BJP and the RSS," he said, making a hand gesture alluding to Telugu hit 'Pushpa'.

It is a matter of regret that in the second case a "woman had to be used", Mevani said.

"What will I achieve by engaging in a scuffle with a junior officer? The police took me into custody and it was their job to interrogate me and I cooperated with them," he said.

Mevani's lawyer Angshuman Bora told PTI that he will be first taken to Kokrajhar as certain formalities are yet to be completed, following his bail being granted by the court there.

"He was rearrested immediately after he was granted bail and brought to Barpeta. The formalities in Kokrajhar are yet to be completed," Bora said. 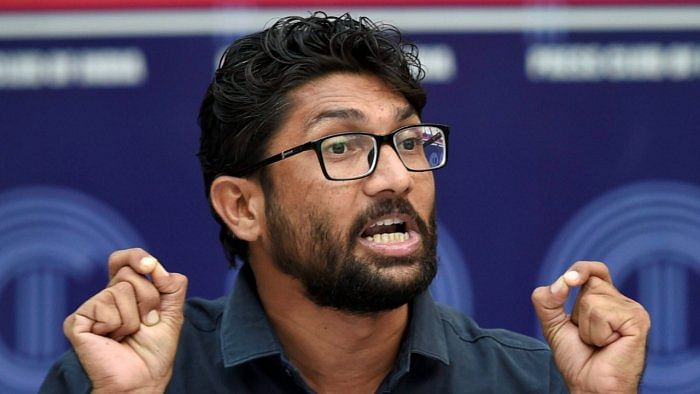 After 2 arrests in 8 days and a week in police custody, Gujarat MLA Jignesh Mevani gets bail