‘Success’ comes before ‘work’ only in the dictionary: International hotels and casinos’ pioneer Sunder Advani

SUMEET NAIK attends the unveiling of international hotels and casinos’ pioneer Sunder Advani’s autobiography, ‘Even Against All Odds’

As glittering stars lit up the sky, some had descended to brighten the lush green poolside arena at Caravela Beach Resort, Goa. Accompanying cool seashore breeze was Frank Sinatra’s famous number, “I have lived a life that’s full, I have travelled each and every highway. And more, much more than this, I did it my way.” Then there was the man himself who not only lived his life his way but also was standing tall with magnetic energy and presence on his 80th birthday. Sunder Advani, pioneer of international hotels and casinos in India took an opportunity on his birthday to share his journey so far through his autobiography Even Against All Odds amidst the presence of his family members and close friends ranging from various fields.

“The word ‘success’ comes before ‘work’ only in the dictionary. And there is no alternative to hard work,” says Advani, whose main aim behind writing his biography was to ensure that the current league of entrepreneurs do not make similar mistakes that he himself committed during his initial days.

Born in Karachi on December 28, 1938, he is certainly among a first-generation shirt-sleeves entrepreneur who have spent a good lot of five decades campaigning for causes related to tourism and continues to do so until this date.

“Sunder is the most gentleman hotelier I have ever seen,” says Ragini Chopra, vice-president, Corporate Communications, Jet Airways, who has known Sunder for last 30 years.

It was in 1969, when he left a promising career in USA to live in Bombay (today’s Mumbai), a city Advani was unfamiliar with. In US, he was working as a Senior Economist at EBS Management Consultants, a division of Ebasco Services, one of the largest firms of Management Consultants in the USA.

Even Against All Odds touches upon several aspects of Advani’s life, be it early college days or representing his father on behalf of International Hotel Association (IHA) at a hotel convention conducted by American Hotel Motel Association (AHMA) when he was just a 21-year-old. Each chapter is a motivational story in itself and undoubtedly an honest guide for everyone who believes in pursuing one’s passion with perseverance. 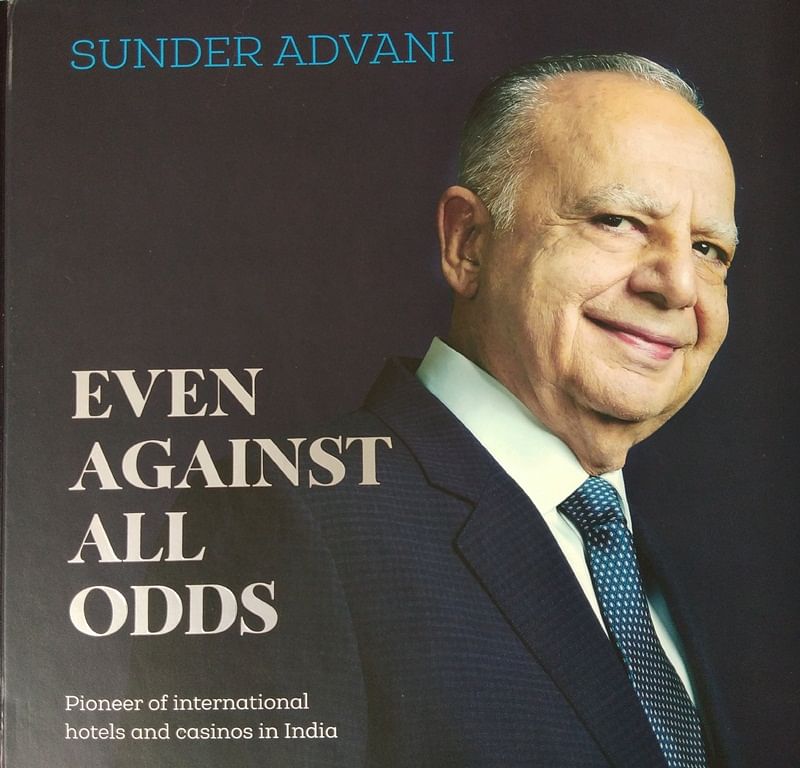 Advani has poured his heart out upon several aspects of tourism industry and all kinds of colourful situations one encounters while running a casino. So much so that having Advani as a family name sometimes turns out to be a problem, according to him.

BJP as a political party known for its anti-casino stand had just come to power in Goa in 1999 when Advani received a full-fledged casino license. “Fingers were pointed and I was accused of having been granted the license because I was a relative of L K Advani, which I am most certainly not,” writes Sunder.

The biography has a vast collection of rare photographs, which makes the read even more interesting and gives every reader a glimpse of what it was in the past and what it has turned out to be in the present. “Collecting and collating these rare photographs was an exciting experience along with great responsibility. Every picture has a story to tell and arranging them with the flow of written words was a journey in itself,” says Shahna Garg Advani, daughter-in-law of Sunder Advani and one of the designers of Even Against All Odds.

Today, being at the helm of World Travel & Tourism Council, India Initiative (WTTCII) and also as the Chairman & Managing Director, Advani Hotels & Resorts (India) Limited, Advani, is of the belief that one must strive to always exceed the expectations of the guests and empathise with what a guest has been through even when you know that they have no basis for the complaint.

No wonder Caravela Beach Resort Goa, headed by his son Prahlad, as Director, Advani  Hotels & Resorts in (India) Ltd. was recently awarded with GO-MMT Customer Choice Award for service excellence. From father to son, we can only say that the party has just begun!