Gold has become more alluring than ever before

Tales around gold have always fascinated people. And as the price moves higher, or promises to climb, the fascination with gold grows stronger. Free Press Journal’s Jescilia Karayamparambil and RN Bhaskar spoke to World Gold Council’s managing director Somasundaram PR to elicit his views about this incredible yellow metal. For over 27 years, Somasundaram has been a banker, has looked after FMCG businesses and is now focussed on gold.

Gold has suddenly become interesting. Why so?

In India, we have never seen this kind of jump in any other asset class in recent times. Therefore, it has added to the lustre of gold. The reasons are predominantly global.

Out of all global factors, dominant factors are:

One is the United States' interest rate scenario which has an overwhelming impact on the price of gold.

The second factor is the trade war between China and the United States. Trade war is a very important part of the developing global uncertainties. There are also other uncertainties and clashes.

But right now every central bank is buying yellow metal. For instance, central banks of countries like Poland, United Arab Emirates, India and others have bought gold too. 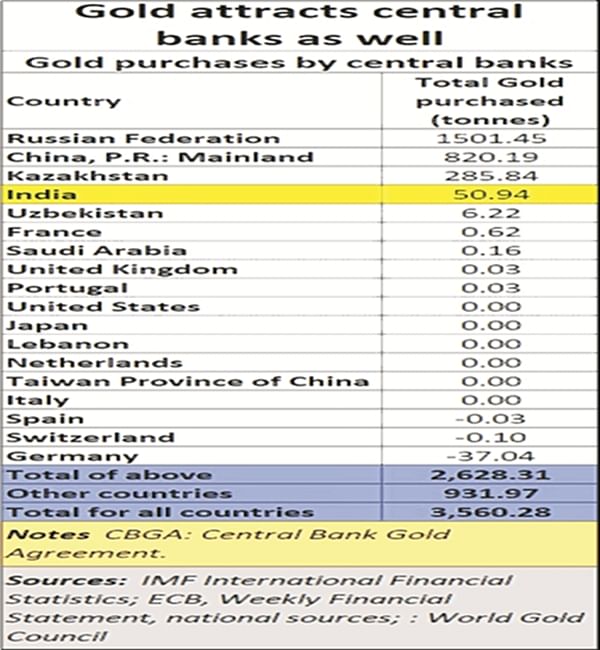 RBI too has purchased over 50 tonnes in the last one and a half years. Every central banker is diversifying from dollars to gold. Although, we do not forecast the gold price, but the factors driving the gold price are so robust that you cannot wish them away in the short run.

Has demand increased in India? What does your anecdotal and the actual data suggest?

This is understandable. In the short run, prices do tend to affect demand. In the long run, the prices do not matter as much as rise in income. This is as per our econometric analysis over the last 25 years.

The biggest influence on gold demand is prosperity. Gold price and monsoon have less impact on gold demand compared to people’s income. In the short run, gold buyers will react to price increase more sharply and the effect in demand can be as high as 2.4 per cent. This particular quarter the demand has been muted and people have a wait-and-watch attitude.

The potential festival demand has been converted into a latent demand. We believe the metal will come back in demand if there is softening of price, or there is an absolute clarity that prices of gold will never come down. If there is an increase of 15 per cent in the price then people join the party. Then it is clear that there is a bargain in the whole thing.

Earlier, gold was priced at Rs 39,500 and now it is down to Rs 38,200. Many buyers wait for the price to come down further. Apart from media, people also depend on their neighbours/ friends for advice on gold and they think that gold prices will come down further.

This acts as a headwind. If the price had remained at Rs 39, 500, we expect the demand would have been better. Gold imports are just 40 per cent compared to last year in the third quarter. There is a 60 per cent drop in imports.

There is a lot of scrap that has come to the market. Do you think that has affected purchasing?

India’s recycling is just 10 per cent whereas globally it is 30 per cent. Gold Monetisation Scheme (GMS) in whatever form thus has a great scope in India. India must reach the global levels of recycling.

It will be a good thing for the government and the industry as well. We expect ‘gold for cash’ to be the highest this year. There is no doubt about it, which is why the imports are also muted.

Why has recycling soared this year?

This is mainly because of the price of gold and rural distress. In the second quarter this year, recycling of gold jumped to 39 tonnes which was never seen before.

In India, generally recycling stands at 65-70 tonnes annually. But by the end of this year, we think there will be a substantial jump in recycling.

What is stopping Indians from opting for recycling?

This is mainly because it is an unorganised market. Since it is unorganised, exchanging gold for liquidity is not an easy task. When you exchange gold for cash, you want the best price and parting with gold is not a very good feeling for many.

This is already putting you in a negative frame of mind. You feel let down further by lots of other things as there is no fixed price, the purity of your gold is questioned etc. It is estimated 90 per cent of people who sold gold were told that their article was under caratage.

Another factor is that the jeweller exchanges gold for gold which is more profitable (than gold for cash).

How much of the scrap would have the smuggled gold element hidden in it?

Actual scrap recycling will not be smuggling, but some smuggling might come through a scrap. Smuggling is always higher than scrap. In our data collection, we segregate the two. In case of recycling, people are worried about getting the right price.

The government has to make some kind of incentive-based system to increase recycling. This is why GMS did not pick up. There are a lots of questions asked by the government in the case of GMS which is not there in lending against gold.

In the case of GMS, people tend to express fear, but when it is gold loan they do not express fear. If the government can allow loan against gold without many questions asked, then they should implement GMS without additional questions.

How effective has hallmarking been? Are there pain points in hallmarking?

Conceptually, hallmarking has been very effective. But spurious hallmarking or dabba hallmarking is a pain point. Even the Indian Hallmarking Association has written about this.

BIS often weeds out such units, they withdraw the licenses that are involved in such act. BIS constantly keeps inspecting them and making sure there are no malpractices. But the work is huge.

Hallmarking has substantially increased in terms of value and not in terms of number. The question is whether they are they reliable. If yes, hallmarking can become a brand.

Hallmarking can be done by very credible partners but for that the industry will have to come forward. We released two reports on hallmarking which states that in many countries, manufacturers are allowed to do the hallmarking on their own.

We believe that India has not reached that stage yet. Brands like Tanishq can do and other big players too, but India will have to emerge with an independent hallmarking and then move towards self certification – an eventual model.

Does discounted price in the market affect organised players?

The discount essentially comes due to smuggling, it does affect the players. If you see, all organised refineries are shut or partially operational due to this. And when you have Rs 1,000 discount, it can hurt the industry.

What do you think the industry will need?

It will need a gold regulator and bullion banking supported by self -regulation by the industry.

Our view is that gold requires one regulatory body. It should not take over what Reserve Bank of India is already doing. It should be a single window regulator which will manage exchange and hallmarking.

The body needs to co-ordinate and ensure that everything is done. We believe that we will then bring gold into mainstream.

HomeInterviewsGold has become more alluring than ever before