Cleanliness complaints to be resolved in one hour.

While speaking Sharma said that BJP is contesting elections on the issues of development. Ratlam city MLA Chetanya Kashyap read out the Sankalpa Patra . In the Sankalp Patra BJP asserted that the party is committed to making Ratlam city Mahanagar.

Mayor helpline will be launched and within an hour complaints about cleanliness will be resolved. Several development works and the addition of new basic amenities have been assured in the Sankalpa Patra by BJP. Meanwhile, a BJP press release informed that the former president of Piploda Nagar Parishad Upma Patel has been expelled from the primary membership of the party for contesting against the party candidate in ward No.6 of Piploda Nagar Parishad.

A total of 24 BJP leaders and workers have been expelled from the party membership for six years on the charge of working against the party or contesting against the official candidate of BJP in Ratlam Municipal Corporation elections, informed district media in-charge of BJP Arun Tripathi. 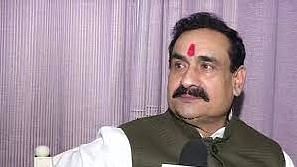