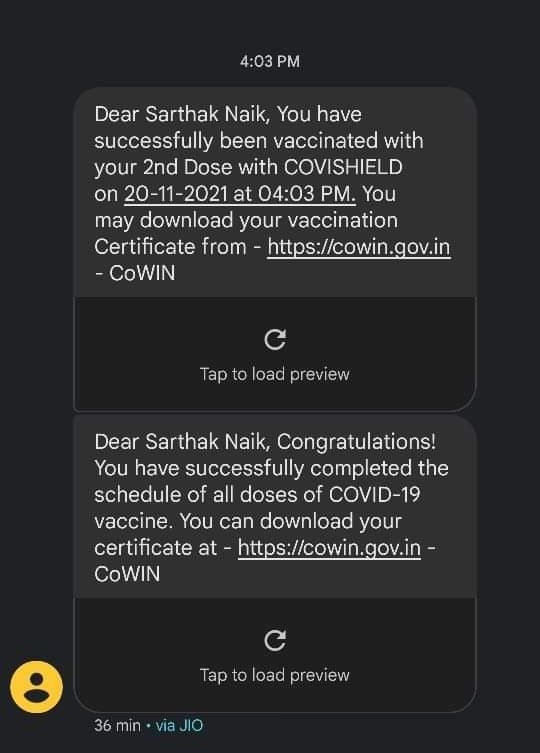 Khategoan (Madhya Pradesh): Sarthak Naik, 22, received his first dose of Covisheild vaccine on August 25. After the interval of 84 days he received a call for his second dose of vaccine at around 11:16 am on November 20.

He told the caller that he could not report to the centre for the vaccination as he is currently in Delhi.

Later at around 4:03 pm, he received a message stating that his second dose of vaccination has successfully been completed.

Startled with the incident Sarthak informed his parents about the message. His father Mukesh Naik informed the chief municipal officer Anil Joshi about the glitch to which he replied that the registered information will be deleted if it happened by mistake on portal.

However, the block medical officer (BMO) Dr GS Baghel denied such possibilities saying that this is not possible and nothing went wrong from his end.

Naik said that negligence of council and health department employees is not forgivable in a sensitive matter like vaccination. Locals claimed that this is not the first time when people here face such glitch.

Sujata, wife of Suryakant Yadav, Pawan Soni, Aruna, wife of Dharmendra Gurjar, and Manju, wife of Prakash Sharma are some of the residents who got such messages, even after they yet to get their second jab.

Many such cases have been reported in Khategaon and its adjoining villages who got calls for the first or second dose, but when they could not go to get the vaccine due to some reason, they automatically got the message that they were successfully vaccinated.

Such people are now running from pillar to post to rectify mistake committed by others.

Show cause notices served to 8 doctors

Mandsaur District collector Gautam Singh has served a show cause notice to eight doctors for their gross negligence and indiscipline during the vaccination session. Despite the instructions of government and health department, people returned from the centres high and dry due to the negligence of the doctors.

Vaccination sessions were organised at several vaccination centers on November 22, 2021 but people were not administered the second dose of C-Vax. Medical officers also did not bother to conduct the session as per schedule. The notice stated that this act is clearly violating clause (i), (ii) of sub-rule (1) of rule 3 of Madhya Pradesh Civil Services Conduct Rules 1965 and not discharging the official duties properly. They have become part of disciplinary action for not being sincere on duty. Ex-parte action will be taken in case the explanation is not satisfactory.