FIR was registered against Mittal under Section 420 (cheating) and 269 (negligent act likely to spread infection of disease dangerous to life) of the Indian Penal Code.

Action has been taken after five department teams led by deputy collector Omnarayan Singh conducted raids at shops and godowns of Gurukrupa Traders situated on the Bistan road and seized edible oil worth Rs 50,11,174 on June 22. Officials involved in the raid claimed that this is the biggest action on a single establishment in the district so far.

FIR was registered against Mittal under Section 420 (cheating) and 269 (negligent act likely to spread infection of disease dangerous to life) of the Indian Penal Code.

Awasiya said that in the proceedings on June 22, oil worth Rs 50,11,174 was confiscated from the firm. Apart from this, illegal wheat storage was also exposed.

Teams of Revenue, Mandi, Weights and Measures, Labour, Food Security, and Food Supply departments were involved in the raid conducted under the direction of district collector Kumar Purushottam. Besides edible oil, the team also found 135.69 quintals of illegal wheat. Whereas it is suspected that 1774 quintals of wheat have been stored without permission.

During the investigation, it came to light that the repacking of oil is also done by the traders. Not only this, 3 weighing forks were not found verified in the investigation done by the Measurement Department. Apart from this, tampering with the actual MRP has also been found on five oil cans of 15 liters each.

Based on the investigation points it was revealed that the 47-year-old Nitesh Mittal, a proprietor of Gurukrupa Traders doing business by illegal means, storing, packing, and selling various types of edible oils under unhygienic and unhygienic conditions.

During the investigation, the department asked for the licenses of the firm on the spot but the license of the firm was not presented on the spot. On the other hand, the vendor present on the spot introduced himself as the owner of the firm. He also said that he has been trading in edible oils for many years. 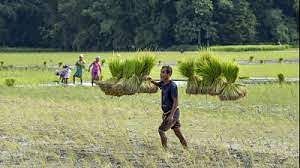