Indore: Three arrested for beating up bangle seller, police looking for others

The assault on Ali provoked members of a particular community to gherao the Central Kotwali police station demanding action against those who had assaulted Ali.
Staff Reporter 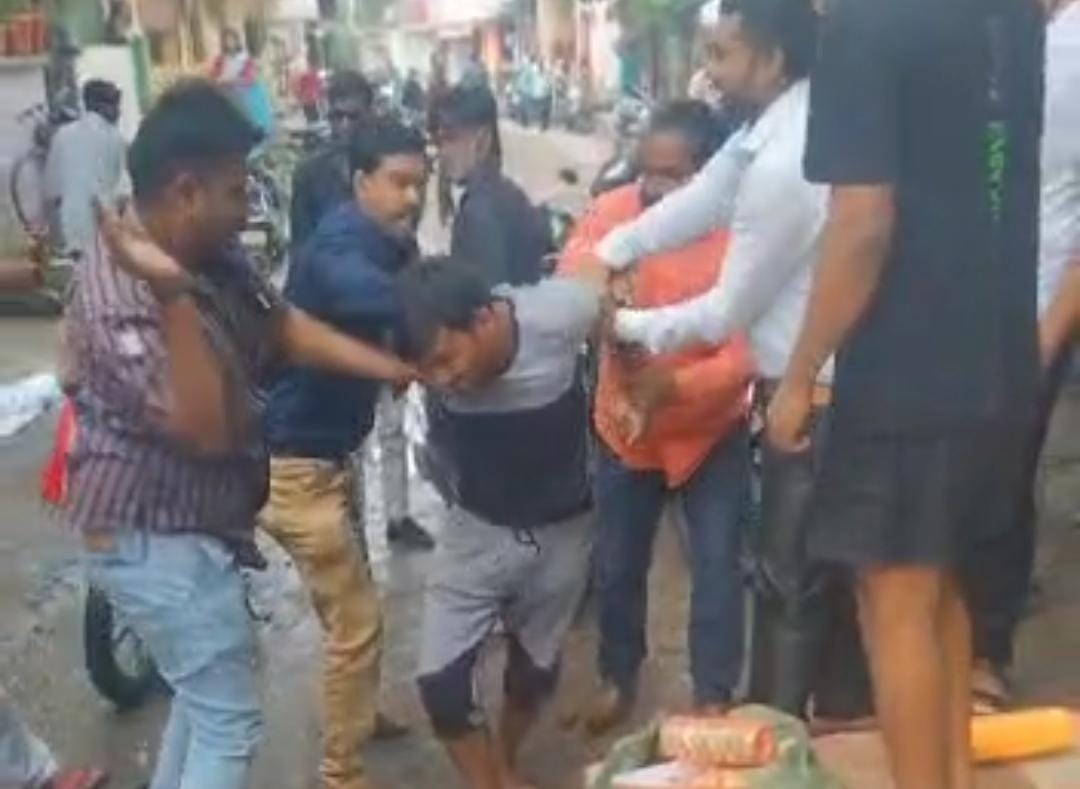 Police have arrested three persons from a group that assulated bangle seller Tasleem Ali in Govind Colony, Banganga area on Sunday afternoon on the basis of video footage that went viral in the social media.
SP East Ashutosh Bagri said that Rakesh Panwar, Rajkumar Bhatnagar and Vivek Vyas have been identified among those assaulting Ali. The accused can also be seen provoking others to beat the victim. Police are also trying to identify other people involved in the assault and will arrest them, SP Bagri added.

SP said that a case under 14 sections of IPC including 141 (Unlawful assembly), 142 (Being member of unlawful assembly), 143, 147(Punishment for rioting), 148 (Rioting, armed with deadly weapon), 149 (Every member of unlawful assembly guilty of offence committed in prosecution of common object), 153-A (Promoting enmity between different groups on grounds of religion, race, place of birth, residence. language, etc., and doing acts prejudicial to maintenance of harmony), 120-B (Punishment of criminal conspiracy), 298, 323, 294, 506, 395 and 34 of IPC has been registered against the accused.

On Sunday noon Ali was selling bangles in Govind Colony area when he was assaulted by a group of people allegedly for touching a girl inappropriately. Video footage of the incident showing Ali being beaten up and abused for his religion went viral on the social media. One of the assaulters could be seen provoking people to beat Ali to take 'revenge' for the August 13 incident in Bombay Bazaar.

The assault on Ali provoked members of a particular community to gherao the Central Kotwali police station demanding action against those who had assaulted Ali. The crowd outside the police station shouted provocative slogans as well as religious slogans while demanding action. Police rushed in additional force to control the situation.

On August 13, a man and his two minor nieces of the Valmiki community were assaulted by a group of men in Bombay Bazaar following a dispute and police had to intervene and rescue them. Cases were registered under Section 307 (attempted murder) and other IPC sections and at least six people were arrested.

Minister's take
Minister of tourism and culture Usha Thakur on Monday said that lack of patriotism among a particular community is the reason behind such anti-national incidents which disturbs communal harmony.

“These people haven't even read the Quran properly as the holy book teaches honesty (Imaan) towards the land where you are living. People involved in such mischievous activities neither read the Quran nor the constitution of the country,” Thakur said.

She said that the accused will not be spared and action under the National Security Act would be taken against them.

The Social Democratic of India (SDPI) officials said they had not called the crowd. They just wanted an FIR to be lodged in the case and had gone to the police station for that purpose.

Banganga TI was unaware of incident

However, the victim said in the FIR lodged at Central Kotwali police station that he went to Banganga police station and two policemen had been sent with him to the spot to verify the matter, but no case was registered.