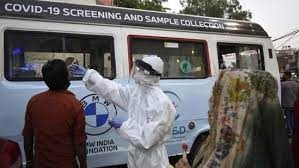 There was no relief from Covid-19 cases for the second consecutive day as eight more people were found positive on Tuesday. With this, as many as 17 patients were infected with the deadly disease in the last two days.

Along with intensifying the contact tracing of the positive patients, health department officials also raised an alert for the people to follow Covid protocols to prevent another wave of the disease.
According to health officials, out of eight patients, two are from the same family, residents of Sapna Sangeeta, where four people were found positive on October 25.

He added that a couple, residents of Robot Square, was also found positive but they have left for Shajapur. Health officials have informed their counterparts in Shajapur for their contact tracing.

Similarly, a 50-year-old woman of Telephone Nagar and a 26-year-old boy of Shanti Niketan Colony were also found positive.

A two-year-old boy positive, men in Jaipur and Bhopal too infected

Another two-year-old boy, resident of Nagin Nagar, was found positive on Tuesday. He was kept in home isolation and his contact tracing has been done. It was not clear from where he got infected.

Two men, living in Jaipur and Bhopal, were also found positive there but city officials were alerted as their residential address was of Indore.

Concerned over the increasing number of cases, health officials have taken 100 more samples of the people who came in contact with these eight patients. Chief Medical and Health Officer Dr BS Saitya too reached patients’ home to know about the source of infection and also about their contacts.