Indore Retail Garments Association president Akshay Jain and secretary Mahesh Gaur said garment traders won't be able to bear the hike in the tax rates and would be thrown out of business.
Staff Reporter 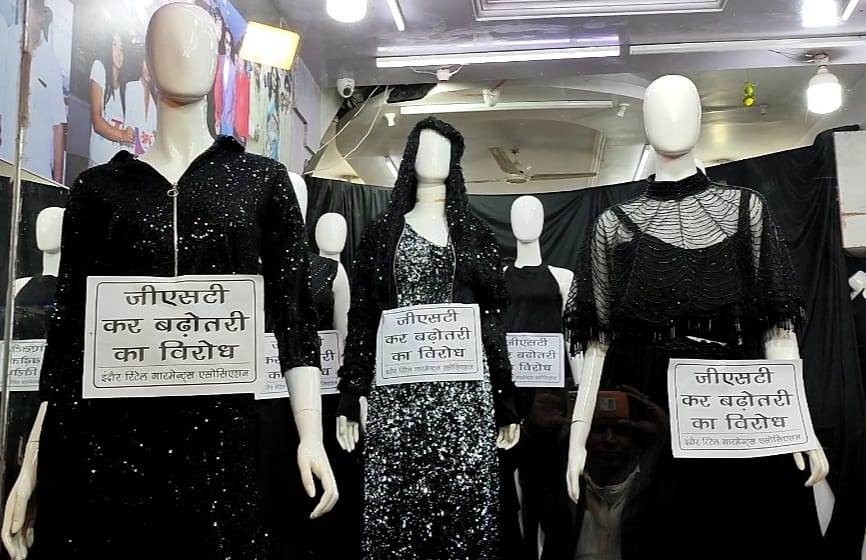 In the ongoing protest of Indore retail garment traders against the hike in GST rates on garments and footwear, the traders observed Black Day on Saturday. They wore black dresses and also put black clothes on display at their shops at several markers in the city on Saturday

Garment traders are opposing the Central Government's decision to increase the rate of GST on clothes, garments and shoes from 5 per cent to 12 per cent with effect from January 1, 2022.

Indore Retail Garments Association president Akshay Jain and secretary Mahesh Gaur said garment traders won't be able to bear the hike in the tax rates and would be thrown out of business.

They said that the hike will also hit the common man and many among the poor won't be able to afford clothes which will cost more. It is important for the government to understand the real ground reality.

Earlier, Retail Readymade Garments Merchants Association members staged a protest against the hike on GST and the mandatory implementation of an e-way bill on the transportation of 30 new goods and products on Wednesday this week by banging utensils outside their shops in the Rajwada area. They demanded the withdrawal of the increased rate of GST.

The Cloth Market Merchant Association had tied black bands on their arms in support of this protest.

Akshay Jain added that the problems have increased after the increase in the GST from 5% to 12%. They had also given a memorandum to former Lok Sabha speaker Sumitra Mahajan in this regard.

One of the association members said that recently inflation has increased in the country, and it has mainly affected garment and footwear trade.

It is claimed by the association officials that due to the increase in GST, the inflation rate in clothes and shoes has reached 7.94 per cent which according to them is the highest inflation rate in the last seven years.