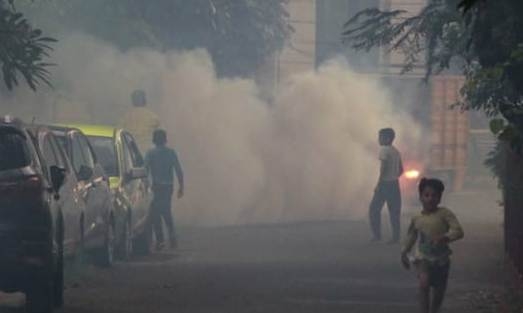 Fogging in the city | FP Photo

Smoke generated due to pollution of firecrackers on Diwali didn’t meet the expectation of health officials to end the mosquito menace in the city as the number of dengue cases are increasing unabatedly.

As many as 15 more samples tested positive to dengue on Thursday with which the total number of cases has reached 880, so far.

The number of cases that were dropping before Diwali has increased swiftly post Diwali. During the Diwali week, the number of cases stood at 15 and this week the count has reached 52, and there are still three more days left.

"The number of cases is increasing and people need to be extra cautious and must use mosquito repellents to prevent the disease," Dr Patel said.

As per the record of the health department, out of 880 total cases as many as 61.36 per cent patients are male i.e. 540 while 38.64 per cent are female i.e. 340. Children too are being affected by the deadly disease as about 25 per cent of the total patients are under the age of 15 years.

No test for the strain of dengue virus

MGM Medical College administration had announced to test for the strain of dengue virus but no test has been done so far. Meanwhile, Chief Medical and Health Officer Dr BS Saitya said that they believe that the DenV-1 type of dengue virus is prevalent in the city but they have not gone through any testing for strain so far.