Duty above life: Indore traffic cops battle rain to carry out their jobs with elan

Indore: The call of duty is above all! Nothing can stop it and, this was demonstrated by Indore traffic police, as they continued to perform their duties amidst heavy rains on Friday evening in the city.

In the first scene, Traffic Subedar Syed Kazim Hussain Rizvi was seen managing traffic barefoot at the busiest square in the city. He had to abandon his shoes as it was all drenched.

In another scene, a traffic constable was seen managing traffic even during heavy rains in another busiest square of the city. Traffic Subedar Rizvi was down to the basics as he caught the attention of motorists and passersby at the Bengali Square even as it rained cats and dogs. People were seen taking photos of this dutiful cop on mobile phones.

Traffic constable Sumant Singh Kachhawa was also seen managing traffic at LIG Square during rains. He was armoured with a raincoat and full of vigour. The intense downpour could not cow down constable Kachhawa. He also helped a doctor replace his flat tyre amidst the rains.

Kachhawa had helped youths in Haryana by providing food items during the lockdown. 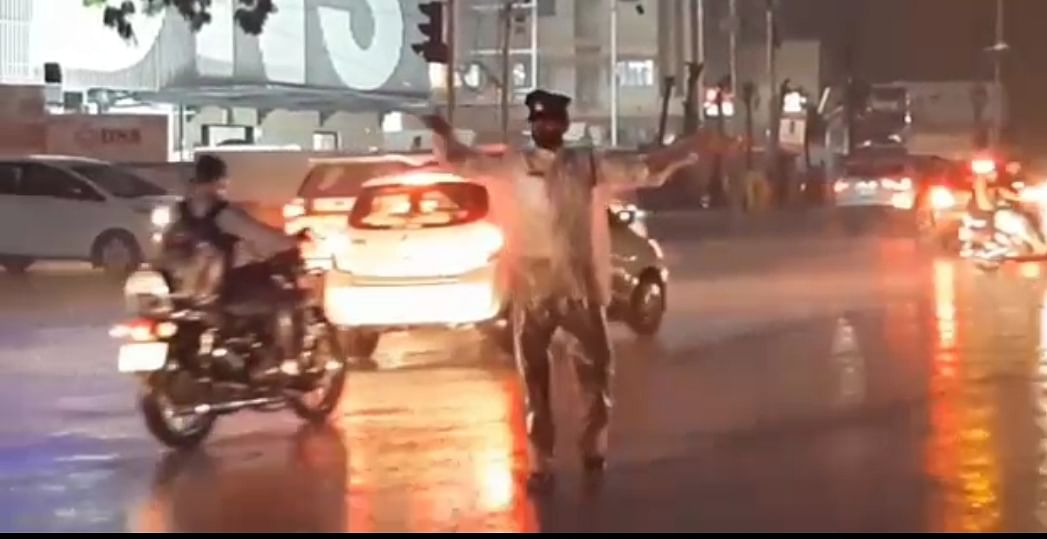 Rains coupled with winds continued from Friday afternoon and over 10 inches of rainfall was recorded in the last 24 hours.

Indore has seen the highest rainfall in 24 hours in the month of August after 1981. In 1981 the city recorded over 8.4 inches rainfall on August 10.