Watch video: The persons who are seen in the video belong to village Sakatya under Khategaon area.

Bhopal/ Dewas (Madhya Pradesh): A day after the Panna district incident, where human corpses were seen floating in a river, another video from Dewas district of Madhya Pradesh surfaced on Wednesday. In the video, four persons are seen offering a body to the river Narmada.

The video, which is going viral on social media, is said to be captured by villagers at Nemawar Ghat situated in Dewas district on May 8. The video shows that four persons are riding on a boat and are wearing PPE kit. The body was also wrapped in a cloth.

Sources said that villagers, when they spotted the incident, had approached the local police station about it but no action was taken.

Though police said that video is yet to be verified, sources said the persons, who are seen in the video belong to village Sakatya under Khategaon area.

Superintendent of Police, Dewas, Shiv Dayal said, “A video is going viral on social media, but we have yet to verify it. No one is coming forward to claim the death. Until the video is verified, it is hard to comment.”

Sources claimed that the deceased was an 80-year-old woman from Jaat community. On May 7, the woman complained of chest pain and also had breathing problems. Before she could be taken to hospital, she succumbed.

As the family members suspect that the woman might have been suffering from COvid-19, they decided to cremate her as per Covid-19 protocol.

They went to Nemawar Ghat, where they hired a boat and offered the body to the river as per their rituals called Jaldaag.

However, Free Press Journal does not verify the video.

Madhya Pradesh: A day after the Panna district incident wherein human corpses were seen #floating in a river, another video from Dewas district surfaced on Wednesday. In the video, four persons are seen offering a #body to river #Narmada. Police have yet to verify video pic.twitter.com/heoaT4zZPk

The practice of Jaldaag or Jalsamadhi has been continued in several communities especially those who live on the banks of rivers in Madhya Pradesh. According to information, Jaat community, especially living on the bank of river Narmada, follow the Jaldaag. As per rituals, if elderly person above 70 dies, he or she is offered to the river believing the river will help him or her to meet the God. 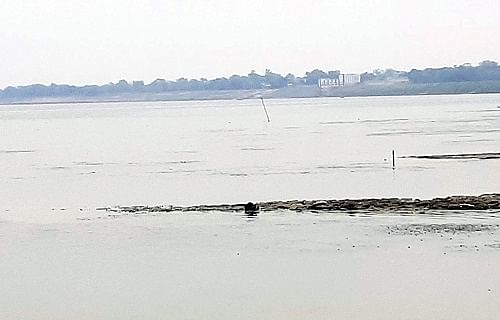