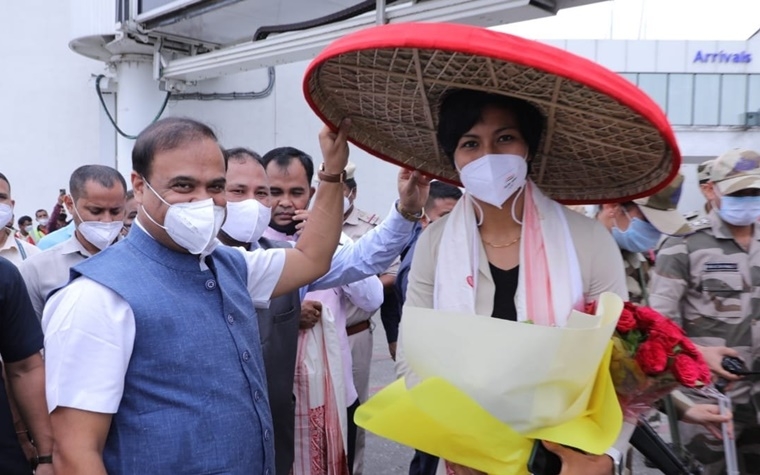 Taking to Twitter, CM Himanta Biswa Sarma said: "With pride & glory, I welcomed our star Olympian medalist Lovlina Borgohain. She has ignited a billion dreams with her success in Olympics & set an example for budding sports talents in rural areas to aspire for achieving big at the world stage."

Meanwhile, Assam assembly on Tuesday congratulated boxer Lovlina Borgohain for winning bronze in the recently-concluded Tokyo Olympics and bringing glory to the state. It wished the 23-year-old boxer luck for her future outings. Speaker Biswajit Daimary read out a congratulatory message for Lovlina which said that her victory will be written in golden letters.

The Golaghat pugilist has brought glory to Assam by becoming the first sportsperson from the state to win an Olympic medal, the message further said.

The legislators had been cheering for Lovlina along with the rest of the state and country throughout her Olympic campaign.

Her performance was keenly watched in the state and the House was adjourned for 30 minutes during her semi-final bout at the Olympic Games on August 4.

A unanimous resolution wishing her luck was adopted by the Assembly on July 20. She was the lone competitor from Assam in Olympic Games this year. The Arjuna awardee, who was also the first woman Olympian from Assam, had won the bronze medal in the welterweight (69 kgs) category at the Tokyo Games. 'Had to work 8 years for this': Lovlina Borgohain after winning Bronze at Tokyo Olympics