Will never accept Sidhu as Punjab CM, he cannot even handle a ministry: Capt. Amarinder Singh

Chandigarh: Senior leader Amarinder Singh today charged the Congress high command of “humiliating” him thrice, leaving him with no option but to step down as chief minister of Punjab.

The writing was clear on the walls since yesterday when the high command ordered a meeting of the Congress legislature party after several legislators had written to Sonia Gandhi, expressing displeasure over Amarinder’s style of functioning.

While addressing mediapersons outside the governor’s residence, Amarinder said while he was still in the Congress, he was open to “other options”.

In a series of media interviews later, Amarinder, who has been asked by the governor to continue in office as chief minister till alternative arrangements are made, lashed out at state Congress president Navjot Singh Sidhu, stating that could never be a good leader for Punjab.

“How can a man who could not handle a ministry handle the state?” he asked, adding that there was no question of backing an incompetent man whom he had removed from his cabinet. As local government minister, Sidhu failed to clear files for seven months,” Amarinder disclosed.

Sidhu had been running a campaign for Amarinder’s ouster over the last few months and had been successful in making the Congress high command veer to his demands.

Dubbing Sidhu as unstable and incompetent Amarinder said, he will fight any move to make the Punjab Congress president the chief minister of Punjab “tooth and nail.”

The outgoing chief minister also made it clear he had no intention of quitting politics. He said there was no question of supporting Sidhu as chief minister who was mixed up with Pakistan and a danger, as well as a disaster, for both Punjab and the country.

“I cannot allow such a man to destroy us, I will continue to fight the issues that are bad for the state and its people,” said the outgoing chief minister.

Amarinder ruled out leaving politics and said that as an Army man, he has a lot of will and will remain active in the assembly elections. “I am not hanging my boots,” he declared, reiterating that he will decide on his future course of action after talking to people close to him, including legislators of the Congress, which Sidhu had divided. He revealed that he had himself asked his supporters him to attend the legislature party meet, and the presence of the large number of legislators at the meeting did not mean they were supporting Sidhu.

Rejecting claims by the Congress leadership that he had lost the confidence of the legislators, Captain Amarinder termed it a lame excuse. “Just a week ago, I had sent to Sonia Gandhi a list of 63 legislators who were supporting me,” he said, adding that they usually respond to what they think Delhi wants, which was the case at the meeting too.

Pointing to the sweeping wins by the Congress under his leadership since 2017, Captain Amarinder said he failed to understand the decision by the party to replace him. “The people of Punjab were clearly happy with my government,” he claimed, adding that till three to four months ago, the tide was completely in favour of the Congress in Punjab, but “they have cut their nose to spite their face, and ended up from a winning to a losing position.”

Expressing pain and shock at the way he was humiliated into quitting, Amarinder said, “Even today, I was not informed about the legislature party meeting even though I was the leader. The way everyone was called at night and informed about the meeting, it was clear they wanted to remove me as chief minister,” he added.

“Punjab has been doing so well in every sphere. I do not understand why the party felt the need to make a change,” he said.

Shiromani Akali Dal president Sukhbir Singh Badal said Amarinder’s resignation was a self admission on the part of the Congress as well as its high command that the party had failed to perform in the state and had nothing to show for more than four and a half years of governance. 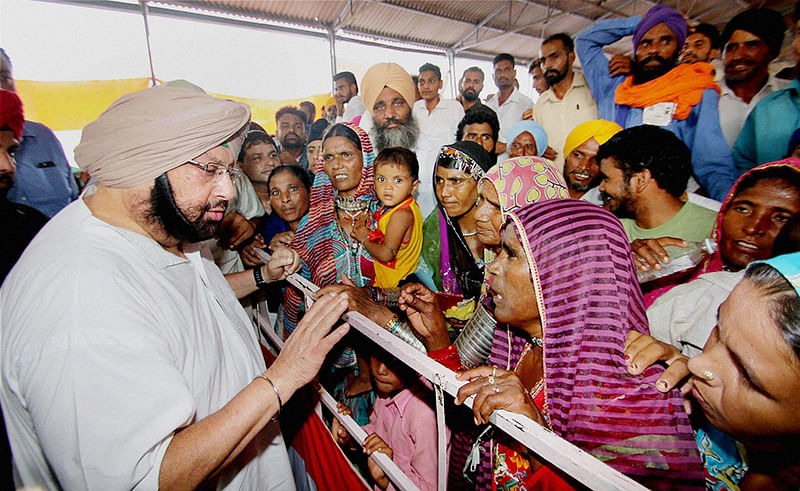