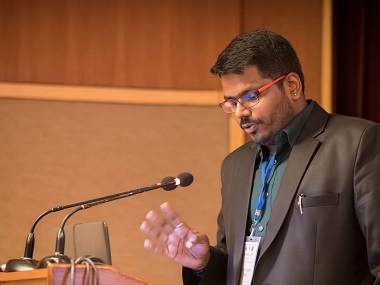 The Supreme Court on Monday resumed hearing on a plea against Sudarshan TV's show on 'UPSC Jihad' alleging that the show targets the Muslim community. Sudarshan TV has filed an additional affidavit before the apex court saying that it will strictly comply with all the laws while airing the remaining episodes of Bindas Bol series on the subject of "UPSC Jihad".

OpIndia was represented by J Sai Deepak who was one of the lawyers in Sabrimala Case.

Who is J Sai Deepak?

According to a Firstpost report published in 2018, J Sai Deepak appeared for intervener organisation People for Dharma in the Sabarimala temple case. Deepak is an engineer-turned-lawyer who decided to pursue law after finishing engineering.

He told the said he made the career change as he was seriously affected by the "political discourse that has taken a sharp turn and has gradually transformed into self-loathing and self-hatred in a very systematic manner".

"I felt that a lot of negative things were being drilled into people's minds in the name of ideology," he was quoted as saying by Firstpost. "I thought I could articulate the Indic position effectively, he said.

According to his website where he publishes his blogs, Deepak describes himself as an "engineer-turned-litigator practising as an arguing counsel before the High Court of Delhi and the Supreme Court of India."

"From July 2009 until June 2016, I was a litigator at the NCR-based Firm Saikrishna and Associates. I was an Associate Partner at the firm when I quit in June 2016 to set up an independent practice as an arguing counsel," he says.

He said that civil commercial litigation, Constitutional law and competition law are his primary areas of practice.