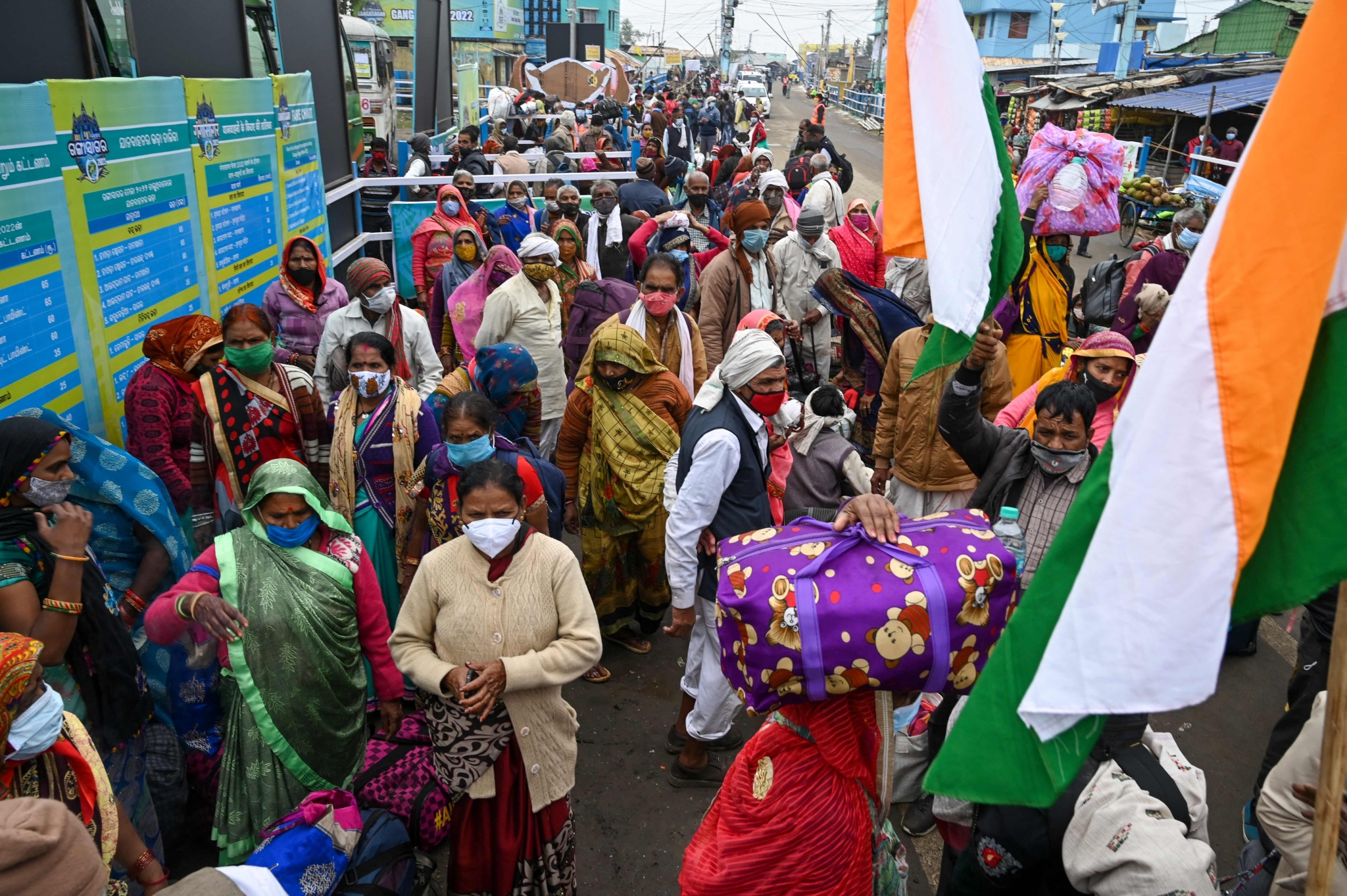 Pilgrims wait for a bus to go to a temple during the Hindu religious festival of Gangasagar Mela on Sagar Island, some 150 kilometers south of Kolkata, West Bengal, on January 12, 2022. | (Photo by Dibyangshu SARKAR / AFP)

Addressing the media at Babughat, the Chief Minister urged all the pilgrims to abide to the verdict of the Calcutta High Court.

“Everyone should undergo RT-PCR test before going to Gangasagar and everyone should wear mask. Gangasagar Mela committee is risking their lives to safeguard people and every saint and common man should abide by the High Court’s verdict,” claimed Mamata.

The Chief Minister also said that the government has announced five lakh rupees insurance for the pilgrims.

“People should abide social distancing and cooperate with the state government so that everyone attending the fair is safe. Everyone should wear double masks,” said Mamata.

Meanwhile, political slugfest started between the Trinamool Congress and the Bharatiya Janata Party (BJP) a day after Calcutta High Court reconstituted the committee that would keep a vigil on the fair to check whether everyone is abiding by the pandemic protocol.

Leader of Opposition Suvendu Adhikari claimed that the state government is afraid of him for which he had moved the court to reconsider the three-member committee to keep the vigil.

“The state government is afraid of Suvendu Adhikari following which they moved the court to remove me from the committee,” claimed Adhikari.

It can be noted that on January 9 Calcutta High Court had given conditional nod to Gangasagar Mela and asked to form a three-member committee including Chief Secretary HK Dwivedi, Leader of Opposition Suvendu Adhikari and a member from Human Rights Commission that would keep a strict vigil on the protocols being maintained at the fair.

Following a plea to court by the state government the committee is reconstituted with retired Justice Samapti Chatterjee and West Bengal Legal Service Authority Raju Mukherjee.

However, Kolkata Municipal Corporation (KMC) Mayor Firhad Hakim who also visited Babughat area to take stock of the pandemic protocol claimed that if any pilgrim is tested Covid positive then that person will be immediately kept in the safe home started by KMC.

Slamming Leader of Opposition, Hakim claimed that the committee to keep a vigil on the fair should be a unanimous body and not comprising political leaders.