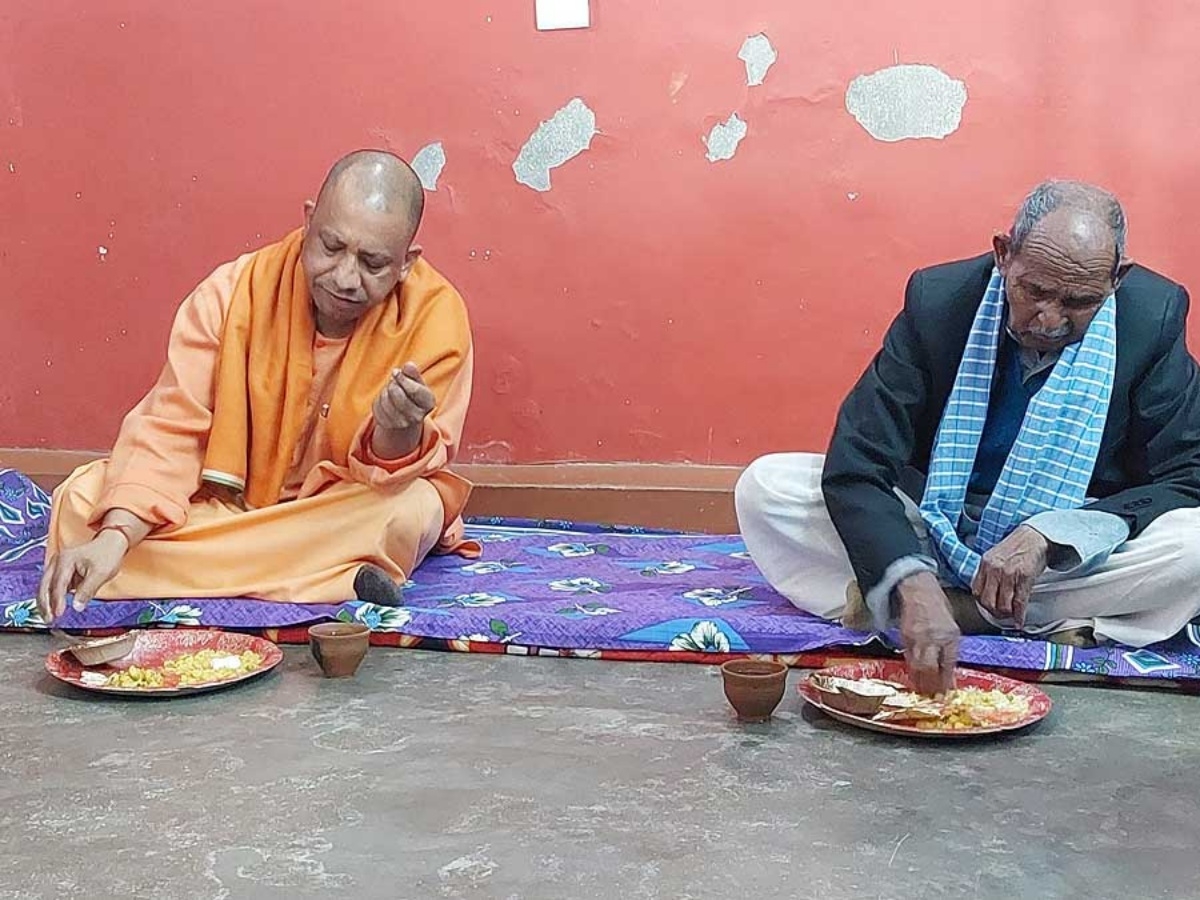 Uttar Pradesh Chief Minister Yogi Adityanath was on Friday, January 14, lunching at a Dalit household in his constituency Gorakhpur. The Chief Minister, whose party BJP and government have faced a major setback after 10 MLAs and a 11th from allies Apna Dal took an exit this week less than 30 days before polls, hit back at Akhilesh Yadav, declaring 'social exploitation' and not 'social justice' was common in UP under Samajwadi Party rule.

"The goal of social harmony is to continue to grow... I had the good fortune of receiving khichdi (and) prasad at Amrit Lal Bhartiji's house at Jhungia in Gorakhpur today. Thank you very much Bhartiji!" the Chief Minister's Twitter handle said.

Videos of the lunch showed a sombre Yogi Adityanath sitting cross-legged on a bright blue mat, with Mr Bharti, looking warily around him, seated a few feet to his left.

After the lunch the CM hit out at Samawjadi Partyy chief, targeting him on affordable housing.

"Only 18,000 houses were given to people under the PM Awas Yojana in the five-year term of the Akhilesh Yadav government, whereas BJP has given 45 lakh houses... it was 'samajik shoshan' (social exploitation) and not 'samajik nyay' (social justice) during Samajwadi Party rule," Adityanath declared.

"Those in the grip of dynastic politics (a trademark BJP swipe) cannot give justice to any section of society... the Samajwadi Party government committed dacoity on the rights of Dalits and poor."

Meanwhile, Swami Prasad Maurya and another ex-minister, Dharam Singh Saini, both joined the Samajwadi Party today, and were welcomed by Akhilesh Yadav.

After joining the party, Maurya said, "Today the conch shell has sounded for the end of the BJP. By misleading the people of the country and state, the BJP has thrown dust in their eyes and exploited people. Now it has to be eliminated... and Uttar Pradesh has to be freed of exploitation."

In 2017 the BJP's strategy was to win over the non-Yadav OBC castes given Mr Yadav's most loyal voters are seen to be Yadavs and Muslims. Uttar Pradesh: Kapil Sibal urges Aligarh DM to intervene in next 'Dharam Sansad' event to be held on...