Prime Minister Narendra Modi, in his virtual address to national office bearers’ meeting, exhorted BJP party workers not to be complacent over the party’s recent successes and suggested that the party should set its agenda for the next 25 years.

"As the party has governments in 18 states, it has more than 400 MPs and 1,300 MLAs, one might tend to think it’s enough. But that should not be the case … We ought not be complacent as our founding fathers have taught us to continue working hard for the people and their welfare," Modi said.

Modi was addressing via videoconference a meeting of national office-bearers of the BJP that was being organised in Jaipur.

Modi said “The world is looking at India with great expectations today. Similarly, in India, the people have a special affection for the BJP.”

Modi pointed out that the hopes and aspirations of people “greatly increases” the responsibility of the BJP.

Modi declared his government had worked to fulfil expectations of small farmers, workers and the middle class. He pointed out the last eight years had seen “balanced development, social justice and social security”.

He added, “We don't have to rest. Even today, we are impatient, restless, eager because our basic goal is to take India to that height which was dreamed of by those who died for the country's independence.”

As a Prime Minister, Modi has received consistently high approval ratings; at the end of his first year in office, he received an overall approval rating of 87% in a Pew Research poll, with 68% of people rating him "very favorably" and 93% approving of his government.

His approval rating remained largely consistent at around 74% through his second year in office, according to a nationwide poll conducted by instaVaani.

At the end of his second year in office, an updated Pew Research poll showed Modi continued to receive high overall approval ratings of 81%, with 57% of those polled rating him "very favorably."

At the end of his third year in office, a further Pew Research poll showed Modi with an overall approval rating of 88%, his highest yet, with 69% of people polled rating him "very favorably."

A poll conducted by The Times of India in May 2017 showed 77% of the respondents rated Modi as "very good" and "good".

In early 2017, a survey from Pew Research Center showed Modi to be the most popular figure in Indian politics.

In a weekly analysis by Morning Consult called the Global Leader Approval Rating Tracker, Modi had the highest net approval rating as of 22 December 2020 of all government leaders in the 13 countries being tracked. 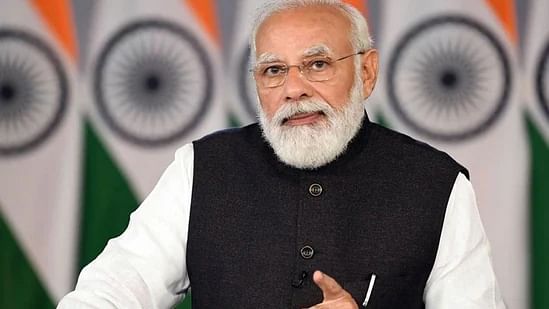