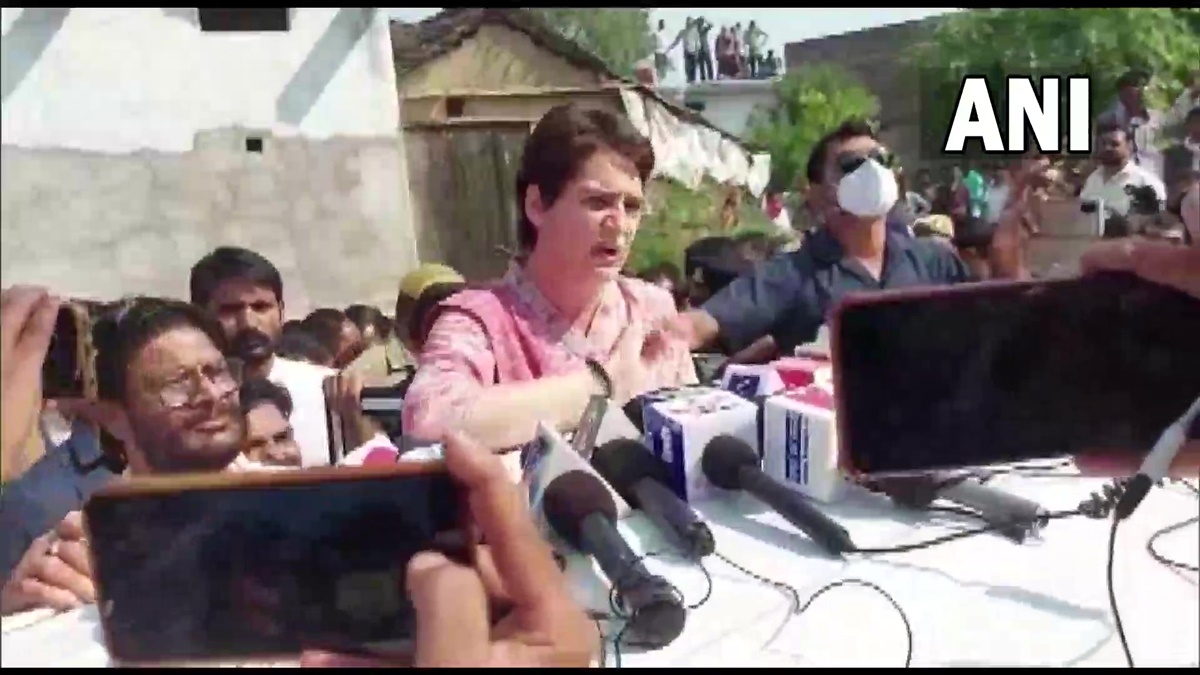 Congress General Secretary Priyanka Gandhi Vadra on Friday met the families of four deceased farmers here, who had allegedly faced shortage of fertilisers, and assured them of all possible help.

In a tweet, the Congress leader said, "Bundelkhand, Lalitpur: Met the affected farmers' families and shared their pain". She also tagged the video of her interaction with the families.

While addressing media after meeting the families of four deceased farmers, Priyanka Gandhi Vadra slammed the Uttar Pradesh government for ignoring the interests of the farmers, alleging that there is a 'severe' shortage of fertilisers in the Bundelkhand region.

Priyanka Gandhi Vadra said: "Lesser quantity of fertiliser is now being given in sacks & the price has been increased. What will they do? They have a lot of issues but govt isn't listening. They know that farmers are on roads for months. They are being mowed down by vehicles."

"The government has failed, it has completely ignored farmers. This is not an issue of these 4 farmers alone, this is an issue of the entire Bundelkhand," Priyanka Gandhi Vadra was qouted as saying by news agency ANI.

Congress general secretary Priyanka Gandhi Vadra on Friday met the families of four farmers in Uttar Pradesh's Lalitpur, who allegedly fell ill and died while waiting in a queue for purchasing fertilizer.

A Congress spokesman told PTI that Priyanka Gandhi Vadra met the families of Bhogi Pal (55) of Naya Gaon village who died after he was taken seriously ill while standing in the queue for fertilisers, Sohi Ahirwar (40) of Mailwara Khurd who allegedly committed suicide after failing to get fertilisers, Mahesh Kumar Bunker (36) of Banyana Narahat village whose condition deteriorated while standing in the line for fertilisers and Bablu Pal (40) of Pali village who allegedly committed suicide.

Last week, a farmer had died in a queue at a fertiliser shop in the district's Jakhlaun area, where he was allegedly waiting for his turn for the past two days.

Superintendent of Police, Nikhil Pathak, had told PTI that Bhogi Pal of Naya Gaon died due to cardiac arrest at a fertiliser shop. He was standing in a queue outside the shop for two days.

On Thursday, the Congress leader interacted with porters at Charbagh railway station in Lucknow. During the interaction, the porters told Vadra about the problems related to their livelihood and the economic blow they faced during the COVID-19 pandemic.

The visit of Priyanka Gandhi Vadra, who is the All India Congress Committee general secretary in-charge of Uttar Pradesh, to Lalitpur comes ahead of the Assembly elections scheduled to be held in the state early next year.