Some SDMC staff were removing hoardings and posters put up by politician Asif Khan, seeing it he began to attack them leading to his arrest.
PTI 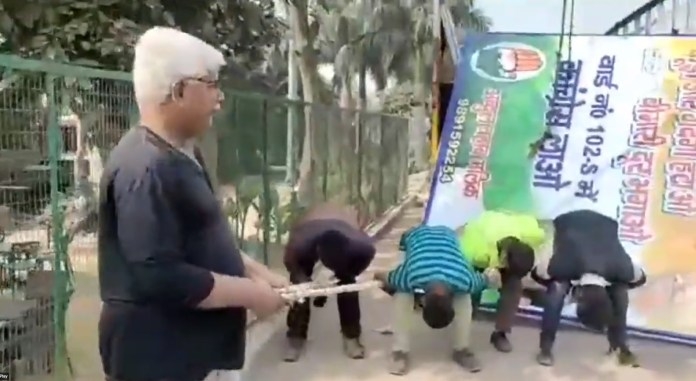 The arrest comes after a video surfaced, purportedly showing Khan abusing SDMC staff for allegedly removing hoardings and posters put up by him.

Deputy Commissioner of Police (Southeast) Esha Pandey said a case was registered against the former Okhla MLA on Friday based on a complaint by Ram Kishore, Inspector, MCD Lajpat Nagar Zone.

"The accused, Asif Md Khan, a resident of Shaheen Bagh, has been arrested, and investigation of the case is under progress," Pandey said.

Khan had on Friday said he had no knowledge that they were SDMC staff.

"I don't know who they were. I received no call or message from the SDMC about the incident," he had said.

The video purportedly showing Khan beating up four men with a stick and directing them to hold their ears while doing squats surfaced on Friday.

He told PTI on Friday that he had noticed hoardings put up by him in the Okhla area were being removed while those of a local AAP MLA and municipal corporations were untouched.

"I saw that some men were removing Congress party hoardings and posters near by home in Okhla. When I questioned why they never removed posters and hoardings of other parties, they did not answer. I just taught them a lesson. I have no idea who they were," Khan had said.

A senior SDMC official said on the condition of anonymity that the people being subjected to "disrespect" belong to the civic body.

"The matter has been discussed with the deputy commissioner of the central zone. Appropriate legal action is being taken by zonal authorities," the official had said.

The remunerative projects cell of the municipal corporation is responsible for removing unauthorised advertisement material and encroachments.