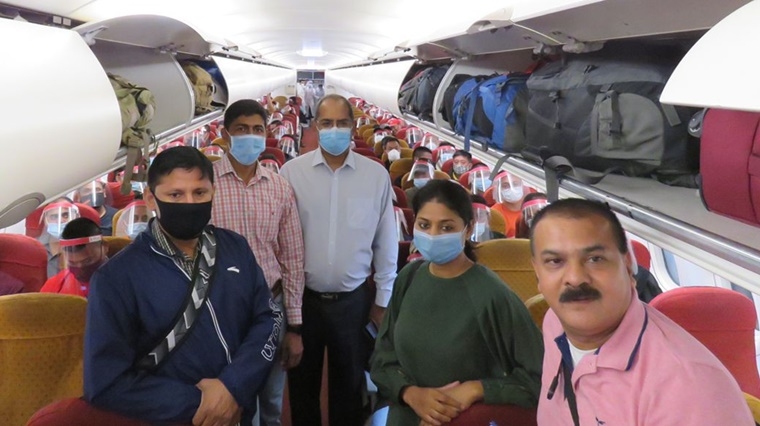 An Air India flight carrying 87 Indian nationals and two Nepal nationals were flown in from Tajikistan amid the deteriorating situation in war-torn Afghanistan.

Expressing their happiness while coming back home from a war-torn nation safely, the Indian evacuees were chanting 'Bharat Mata ki Jai' inside the flight. "Jubilant evacuees on their journey home!", tweeted Arindam Bagchi.

India on Sunday evacuated 168 people including 107 Indians from Kabul in a military transport aircraft of the IAF amid the deteriorating security situation in the Afghan capital city following its takeover by the Taliban a week back.

India evacuated 200 people including the Indian envoy and other staffers of its embassy in Kabul in two C-17 heavy-lift transport aircraft of the IAF after the Taliban seized control of Kabul.

The first evacuation flight brought back over 40 people, mostly staffers at the Indian embassy, on Monday.

The second C-17 aircraft evacuated around 150 people including Indian diplomats, officials, security personnel and some stranded Indians from Kabul on Tuesday.

The Taliban swept across Afghanistan this month, seizing control of almost all key towns and cities including Kabul in the backdrop of the withdrawal of the US forces.

The mission to evacuate close to 200 Indians was accomplished with support from the US Following the evacuation, the MEA said the focus now would be to ensure the safe return of all Indian nationals from the Afghan capital.

The MEA said the immediate priority for the government is to obtain accurate information about all Indian nationals currently staying in Afghanistan.

It also requested the Indians as well as their employers to urgently share the relevant details with the special Afghanistan cell.