Rao, 81, is currently lodged as an under-trial in the Taloja prison in neighbouring Navi Mumbai.
PTI 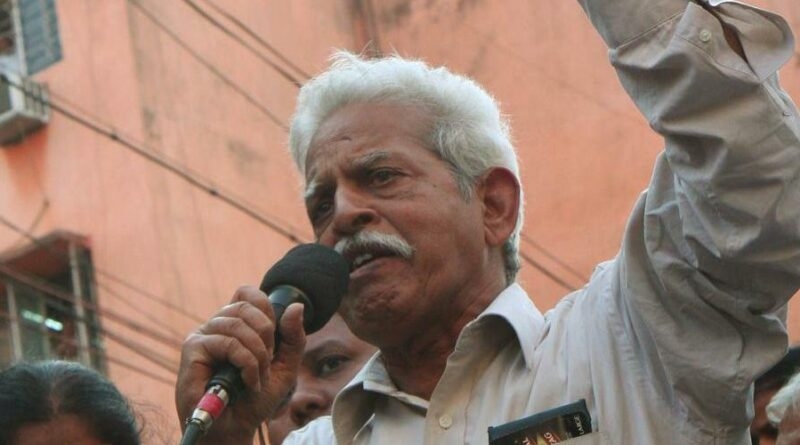 Jailed poet-activist Varavara Rao, an accused in the Elgar Parishad-Maoist links case, is "fully conscious and oriented", the Maharashtra government stated in a medical report submitted before the Bombay High Court.

However, on the submission of Rao's counsel Indira Jaising that the report "did not shed any light on Rao's neurological condition and the urinary tract infection he is said to have developed while at the Taloja prison", the HC directed the government to file a "complete report detailing the type of medical exam conducted through video conferencing, and all other findings".

Rao, 81, is currently lodged as an under-trial in the Taloja prison in neighbouring Navi Mumbai.

Rao had filed a bail application and a writ petition seeking he be shifted to Nanavati Hospital in Mumbai immediately, owing to his "diminishing neurological and physical health condition".

The high court will hear both pleas of Rao on Wednesday.

Jaising told a bench of Justices SS Shinde and Madhav Jamdar that the state government's report was an "eyewash" as it is "silent on Rao's dementia".

Jaising told the bench that doctors at Nanavati Hospital who had examined Rao on November 12 via a video link, had also suggested that further tests, including a complete blood count and sonography of the abdomen, be done on him.

"The state has yet to get the tests done. Besides, the doctors examined Rao through the video link only for 15 minutes. He needs to be examined by specialists. A neurologist needs to examine him physically and these tests can't be done at the Taloja prison hospital," Jaising said.

"...Rao was not examined by a specialist so how can the video examination tell this court whether he needs to be shifted out of the prison to the hospital?" she said.

Jaising also said the state government should apprise the HC about Rao's complete medical condition in light of his application seeking bail on medical grounds.

The HC then directed the state government to submit a complete report, detailing the "type of medical exam conducted through video conferencing, and all findings".

The HC will now hear both the pleas filed by Rao via a physical hearing on Wednesday to avoid any further delay and technological hindrances, after Jaising faced issues with the audio arrangements during the day's hearing conducted via video link.

"We know the seriousness involved in this matter and that is why we will hear it physically tomorrow itself," the bench said.

Jaising sought the HC's directions to the state government to submit details of Rao's current neurological condition too, but Additional Solicitor General (ASG) Anil Singh, who appeared for the National Investigation Agency (NIA), told the court that it could "examine the issue tomorrow itself.

Since his arrest in June 2018, Rao has been in and out of the government-run JJ hospital in the city. On July 16, he tested positive for coronavirus, after which he was shifted to the Nanavati hospital. He was discharged on July 30 and sent back to the Taloja prison, Jaising said.

Last week, Jaising had urged the high court to direct the state government to shift Rao to Nanvati Hospital immediately in view of the apprehension that "Rao might lose his life while in prison".

Jaising had said "Rao had dementia, had lost control of his bladder, was in diapers, and that his condition was deteriorating with each passing day".

Jaising had alleged that the state government had been negligent in taking care of Rao in prison, "and if he died, it would be a case of custodial death".

Following the submissions, the HC had ordered the video examination while giving the Nanavati doctors the liberty to examine Rao physically at the prison if needed.