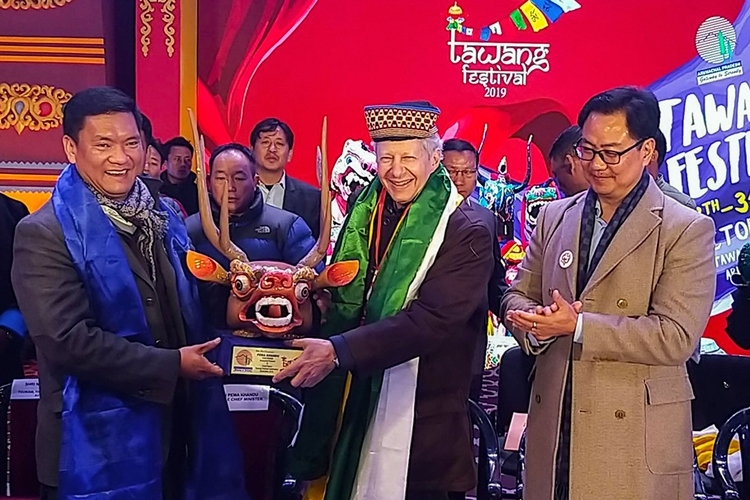 United States Ambassador to India Kenneth I Juster being feliciated by Arunachal Chief Minister Pema Khandu in the presence of Union Sports Minister Kiren Rijiju during the opening ceremony of Tawang Festival. |

The seventh edition of Tawang Festival in Arunachal Pradesh was inaugurated by US Ambassador to India, Juster Kenneth in presence of Chief Minister Pema Khandu. The Ambassador opened the festival by expressing his gratitude to the people of Tawang for their exceptional hospitality and warmth.

He said that he was impressed by the colours, traditions and customs followed by the people of Tawang, while emphasizing on the need for cultural exchange programme between the two countries that eventually lead to strengthening of bonds and friendship.

Ambassador Kenneth also added that the United States has been funding a lot of states in India in order to help them preserve their culture and traditions. Further adding that this is one area where the US and Arunachal Pradesh can start a partnership.

He also informed the enthusiastic crowds present that the US has been providing funds to improve the health sector in the state. The result is seen in the modernisation of hospitals and health facilities in Namsai and Pasighat. The Ambassador also assured the crowd that more funding will be provided to bring modern technologies to health facilities, thereby providing good health services to the people.

On his part, Chief Minister Pema Khandu said that he considered himself fortunate for having hosted two US Ambassadors in three years, and also briefed the dignitaries of the strength, opportunities and challenges that the state faces.

The CM said that the state has enormous potential due to abundance of natural resources and `can develop into one of the most prosperous states in the country with proper planning and investment. He said that his government is coming out with investment options in tourism, Agri & Horticulture and Hydropower sectors and called on the US Embassy’s support for bringing American investment into these avenues.

Speaking of tourism, Khandu said that only 336 US tourists had visited Arunachal in the last three years, and hoped that with the help of the US Embassy this number would increase 10 times in a couple of years.

Union Minister of State for Sports & Youth Affairs Kiren Rijiju congratulated the people of Tawang for hosting the festival and commented that it was slowly becoming the face of Arunachal with increased participation year after year. He also lauded efforts of CM Khandu in developing the state and assured him of all support from the Centre for fulfilment of his vision for Arunachal.