New Delhi: Archana Gautam got an early glimpse into the murky world of politics soon after the Congress picked her as its candidate from Uttar Pradesh's Hastinapur seat but the actor-model says she is emboldened by party leader Priyanka Gandhi Vadra's words -- don't get scared, be strong.

The 26-year-old political debutante and former Miss Bikini India from the largely rural, conservative belt of western Uttar Pradesh is unfazed by old pictures of her doing the rounds of social media and the derogatory comments, just as she is undeterred by attacks from rival BJP and groups such as the Akhil Bharat Hindu Mahasabha.

Gautam joined the Congress in November last year after a brief stint in acting where she starred in movies such as "Great Grand Masti" and "Haseena Parker". But it is her background as winner of the 2018 Miss Bikini India pageant that is being used as ammunition by political rivals as well as trolls ahead of the assembly elections beginning next month.

While the BJP accused the Congress of indulging in "cheap publicity" by fielding Gautam from the constituency in Meerut district, social media users dug out her old photographs and videos to slut-shame her.

Gautam said she is taking it all in her stride.

"When I spoke to Priyanka didi, she told me, 'Archana, you're stepping into this world but don't come half-heartedly. There will be trolling because of your pictures and videos but you don't have to get scared, you have to stay strong.' "So I'm already emboldened by Priyanka didi's words and there's nothing that can stop me," she said.

Taking the many attacks on the chin, the daughter of a homemaker mother and a farmer father said people should be proud of her for representing India on an international platform.

"To people who are abusing and making vulgar statements about me, I want to say that I have two professional lives and they are both different from each other. I would like them to not mix the two because I represented India on an international platform. I have made my country proud," the beauty pageant winner added.

The young woman said she also wants to rewrite the Draupadi narrative that Hastinapur is associated with.

In the "Mahabharata", Hastinapur was the capital of Kuru kingdom ruled by the Kauravas. The war fought between Kauravas and Pandavas was for the throne of Hastinapur.

"People here believe that it is the curse of Draupadi that this land will never be able to prosper. I believe we have to make a lot of efforts to get rid of this curse," said Gautam.

"I'm confident that I can bring about a change here because I have been born and brought up in this city. I'm not someone who flew down from Mumbai to fight the elections. I have a home and did my studies here." The world of politics is new but not entirely unfamiliar for Gautam who has a degree in Journalism and Mass Communication from IIMT, Meerut.

"I have been following politics since childhood. I was always aware about the happenings of the political world as I used to read and watch the news a lot. I often felt angry when I would read or see wrongs being done to the public." What prompted Gautam to join politics was the 'Ladki Hoon Lad Sakti Hoon (I am a girl and I can fight)' call given by Congress general secretary Priyanka Gandhi.

"I was at home and I saw the interview of Priyanka didi in which she gave the call. That slogan inspired me a lot and also how she talked about empowering women so that we all can achieve our dreams. This step in politics is a result of that." As a youth, Gautam said she was also inspired by late prime minister Indira Gandhi.

"... I have read and heard a lot about her. She worked so hard for the upliftment of poor and marginalised communities. After her, I have been inspired by Priyanka didi. When I got to know that Priyanka didi was in-charge of UP, I wanted to join politics." The Congress is also a party that never sells tickets or indulges in communal politics, she said.

Gautam said the people of Hastinapur are looking for a change and she believes that she can defeat the incumbent MLA, Dinesh Khatik of the BJP.

"Every person aspires for change, whether it is in life or in the country. I believe that the public of Hastinapur are looking for a change and they have a fresh face. I want them to support their daughter and ensure that she wins this election." The choice of Gautam shows the Congress has no candidates and is ready to field anybody to garner cheap publicity and headlines, Uttar Pradesh's BJP spokesperson Rakesh Tripathi has said.

Akhil Bharat Hindu Mahasabha and Sant Mahasabha chief Swami Chakrapani also hit out at the Congress candidate from the reserved assembly constituency in Meerut district, saying "nothing can be expected from a party which has gone mentally bankrupt".

"If any person is entering social life, then he/she should be one who respects our culture," he said.

Defending its decision, the Congress said it's shameful to read and hear demeaning marks against the young woman.

"She deserves our respect just like any other woman does. Those who are making derogatory remarks against her are only displaying their anti-women stance," Congress spokesperson Supriya Shrinate said in New Delhi.

Assembly elections in Uttar Pradesh will be held in seven phases beginning February 10. The results will be announced on March 10. 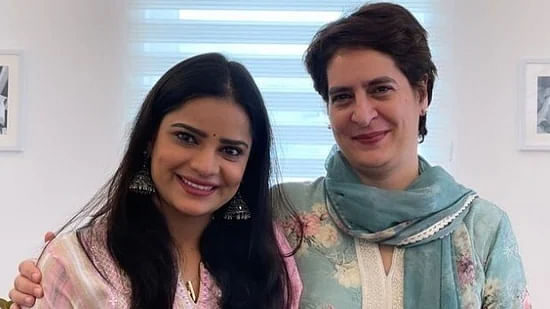 Who is Archana Gautam? Congress candidate from Uttar Pradesh's Hastinapur who was Miss Bikini India...