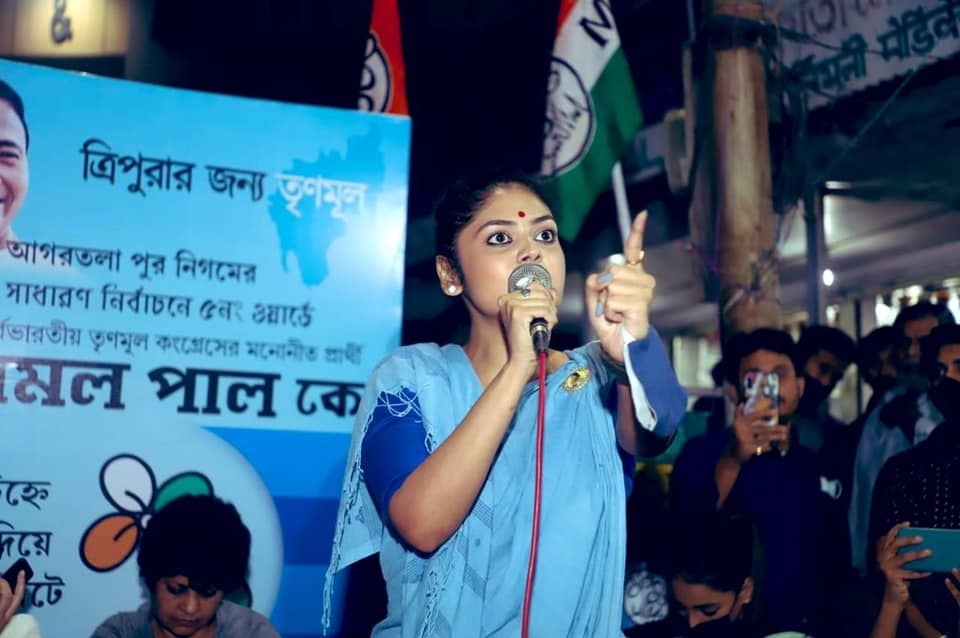 Tripura: Trinamool Youth Congress President Sayoni Ghosh has been arrested by the Tripura Police on attempt to murder charge: her car had allegedly hit a passer-by.

With that, the slugfest between the TMC and the BJP has renewed with fresh vigour. The BJP has alleged that Sayoni tried to mow down BJP workers at a public meeting.

Trinamool Congress sources said that around 11am, some women cops came to the hotel where Sayoni was staying, and said they wanted to question her. They also wanted to impound her vehicle. According to locals, she was detained and taken to a women’s police station in West Tripura; and after several hours of quizzing the TMC youth wing president was arrested. She will be produced in court on Monday.

The trouble erupted late Saturday evening when Sayoni was driving past a BJP public meeting which was being addressed by Tripura CM Biplab Deb. The TMC youth leader mocked the poor turnout at the gathering and when a person recognized her, she chanted: "Khela hobe’’ (the game is on).

Sub-divisional Police Officer (Sadar) Ramesh Yadav said Ghosh was arrested under IPC Sections 307 (attempt to murder) and 153A (promoting disharmony between two groups) for her comments against the chief minister.

Incidentally, TMC national secretary Abhishek Banerjee is scheduled to hold a rally in Agartala on Monday, ahead of the civic poll on November 25.

Slamming the BJP-led Tripura government, Abhishek wrote, “@BjpBiplab has become so unabashedly brazen that now even Supreme Court orders don’t seem to bother him. He has repeatedly sent goons to attack our supporters & our female candidates instead of ensuring their safety! Democracy being mocked under @BJP4Tripura. #NotMyINDIA.”

The Supreme Court recently directed Tripura police to ensure that no political party is prevented from exercising its rights in accordance with the law, especially the right to campaign peacefully.

Meanwhile, a delegation of at least 15 TMC MPs will visit the national capital on Monday; they have sought an appointment with the Union Home Minister Amit Shah to discuss the alleged police brutality in Tripura. The MPs are also scheduled to stage a sit-in protest in the national capital from Monday morning.

TMC West Bengal general secretary Kunal Ghosh said that Sayoni had been ‘illegally’ detained by the police; he also claimed that false charges had been slapped on the TMC youth wing president.