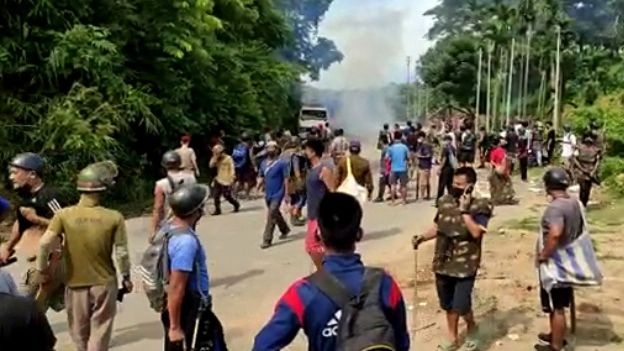 Days after violent clashes killed six Assam Police officials and injured many others, the two states remain locked in a spat. Allegations have emerged from both sides, with reports indicating that there had been blockades set up on Assam's roads leading to Mizoram. Assam-based organisations had vowed to enforce an indefinite "economic blockade" against Mizoram from Saturday, disallowing entry of people from the neighbouring state.

In the meantime, Assam Minister Ashok Singhal contended that Mizoram civilians are threatening the people of the state. The Assam government had on Thursday issued an unprecedented travel advisory asking people not to travel to Mizoram and advised people from the state working or staying there to "exercise utmost caution."

According to officials in Mizoram, miscreants from Assam have removed railway tracks and blocked National Highway (NH) 306 disrupting transportation to the state. Land-locked Mizoram has been getting its supplies via Tripura during this week as tension and unrest held up its normal supply route through Assam. But with a fearful atmosphere having taken over the area, many vehicles refuse to enter. Reportedly, long line of trucks parked on the highway now mark the entry point to Dholai's bazaar near the border.

"Essential commodities and Covid-19 related medical equipment for Oxygen Plant should never be blocked!" exclaimed Mizoram Chief Minister Zoramthanga on Friday. Later in the afternoon, officials in Assam's Barak valley said that the blockade had been lifted and no group was now out on the streets trying to stop truckers or other vehicles.

As per reports on Friday afternoon, the situation along the border remains tense but calm as CRPF troops patrol National Highway 306. "The CRPF is manning the border. Assam police have withdrawn as per directions of the Ministry of Home Affairs (MHA) but on Mizoram's side, the police are still out there which is making the situation tense," Cachar Superintendent of Police, Ramandeep Kaur had said earlier.

Taking to Twitter later on Friday, CM Zoramthanga insisted that there were no curbs on the movement of non-residents of Mizoram in the Kolasib districts. The attached advisory also called upon Mizo residents to cause no harm to non-locals.