A petrol bomb was hurled at the Rashtriya Swayamsevak Sangh (RSS) functionary Seetharaman's residence at Tamil Nadu's Chitlapakkam in Tambaram, near Chennai, on Saturday.

While speaking to ANI, Seetharaman said, "At around 4 am, we heard a loud sound and saw fire outside. We thought it might be a short circuit, but it wasn't the case. We doused the fire and called police officials. They got the footage of the accused."

The attack comes a day after the Popular Front of India (PFI) on Friday announced a strike against the country-wide raids conducted by the NIA on September 22 at its office and various other locations. Many PFI leaders and workers were also arrested. 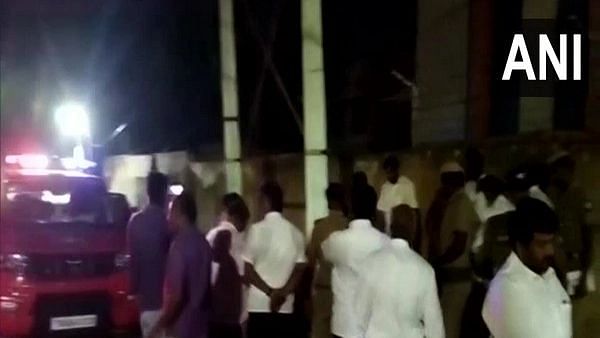 On Thursday, two miscreants hurled a petrol bomb at the RSS office in Kerala's Mattannur. Police reached the spot to control the situation.

Miscreants also hurled a bottle filled with an inflammable substance at the BJP office in Coimbatore on Thursday night, triggering tension in the area. Police reached the spot to take control of the situation and conduct a preliminary investigation. No injuries were reported, the police said.

These searches were conducted at the houses and offices of the top Popular Front of India (PFI) leaders and members in connection with 5 cases registered by the NIA following continued inputs and evidence that the PFI leaders and cadres were involved in the funding of terrorism and terrorist activities, organising training camps for providing armed training and radicalising people to join banned organisations.