A hero for loan seekers and a villain for the banking system would perhaps sum up the life of the popular but controversial man who left Indian Bank with a negative balance sheet of Rs 1,336 crore during the financial year 1995-96
N Chithra 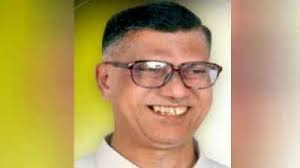 Chennai: Former Chairman and Managing Director of the Indian Bank, M Gopalakrishnan, who shot to limelight with seven extensions in service and the sensational multi-crore bank scam in the 1990s, died on Wednesday night in Chennai, after a brief illness. He was 86.

A hero for loan seekers and a villain for the banking system would perhaps sum up the life of the popular but controversial man who left Indian Bank with a negative balance sheet of Rs 1,336 crore during the financial year 1995-96 when he demitted office. He had headed the bank from 1988 to 1995.

Until the scam hit national headlines, Gopalakrishnan was a popular figure who would appear almost daily in the Doordarshan’s daily Tamil news bulletins (in the pre-satellite TV era) inaugurating or participating in one public function or the other. Many entrepreneurs, politicians and even some journalists benefited hugely from his loan sanctioning largesse. He also reportedly supported philanthropic ventures. He was at that time close to Congress troubleshooter GK Moopanar.

However, in 1996, when the CBI arrested him on charges of having sanctioned loans flouting rules, he became a persona non grata even among the circles that gained most from him.

In all, he and his colleagues faced 18 cases. The CBI court in Chennai convicted him in five cases and acquitted him in one. The remaining cases are pending.

In one of the cases, he was sentenced to 14 years imprisonment. Gopalakrishnan and others had challenged their conviction in the various cases.

Belonging to the Yadava community, he tried his hands in politics apart from steering the Yadava Mahasabha in Tamil Nadu.

In 2001, as candidate of a Yadava-dominated party, which had allied with the DMK, he lost to an Independent in Bhuvanagiri Assembly constituency. Interestingly, the Independent was randomly selected and backed by the AIADMK at the eleventh hour after the nominations of both former Chief Minister J Jayalalithaa and the AIADMK dummy candidate were rejected. Jayalalithaa’s papers were rejected as she was convicted in the TANSI land deal case and also filed nomination papers from four constituencies, whereas a candidate can simultaneously contest only from two seats.