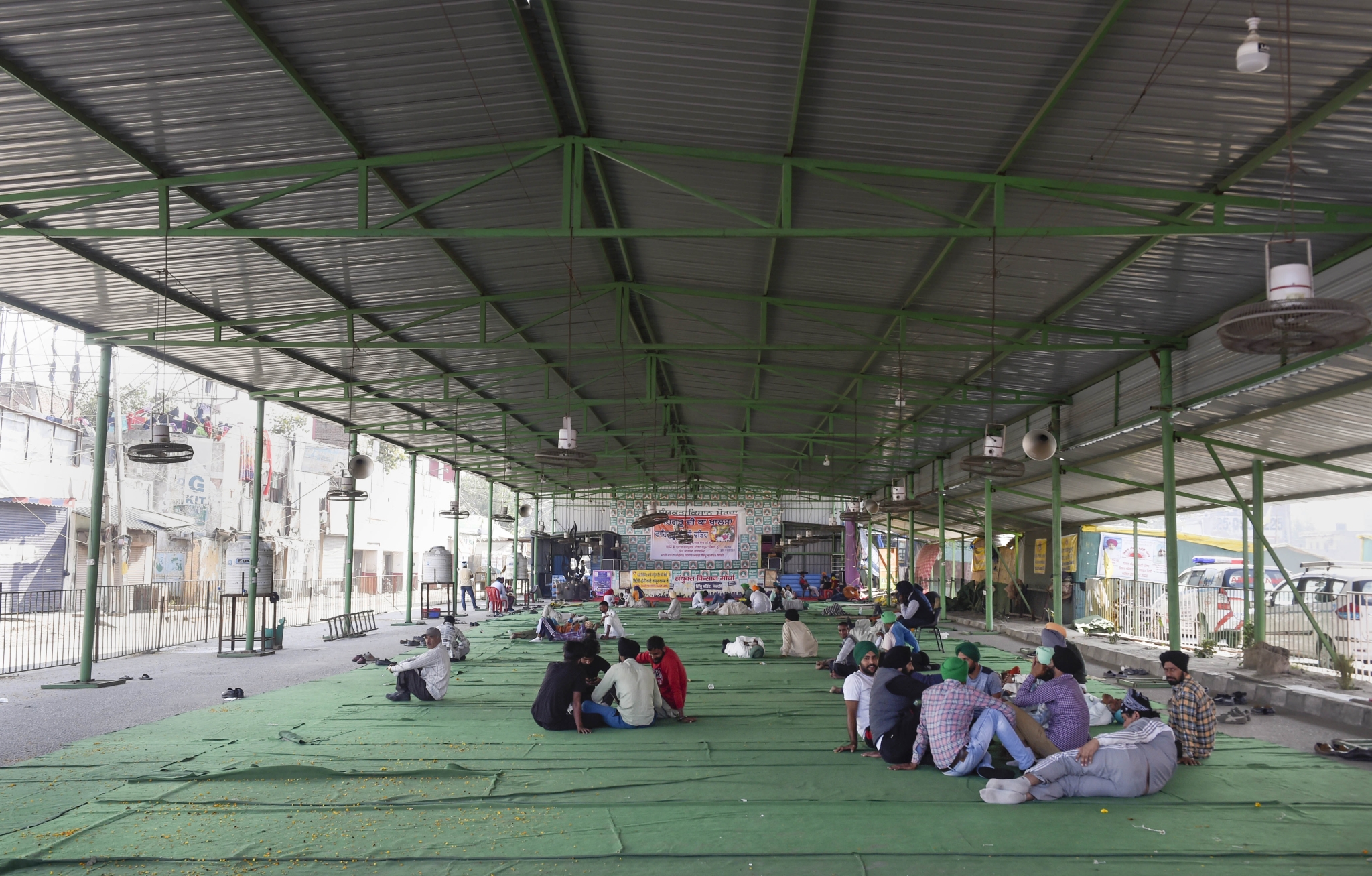 Lucknow: Digging in their heels, farmer unions said on Sunday they will continue their agitation till the government starts talks with them on their six demands, including a law guaranteeing MSP and the arrest of Union Minister Ajay Mishra, even as the Centre prepared to bring bills in Parliament to repeal its three agri laws.

The agitation spearhead, Samyukta Kisan Morcha (SKM), also said the farmers would go ahead with their planned protests, including a mahapanchayat in Lucknow on Monday to press for a law on Minimum Support Price (MSP) and a march to Parliament on November 29 to observe one year of anti-farm law protests.

The umbrella body of agitating farm unions took the decision at its first meeting after Prime Minister Narendra Modi in his address to the nation on Friday announced that the three farm laws will be repealed, fulfilling a major demand of the agitating farmers.

Government sources said on Sunday the Union Cabinet is likely to take up for approval on Wednesday the bills for rescinding the three farm laws so that they are introduced in the forthcoming winter session.

In an open letter to Prime Minister Modi, the SKM thanked him for the repeal of the three farm laws, but noted that "after 11 rounds of talks, you chose the path of unilateral declaration rather than a bilateral solution".

They put forwards six demands including that MSP based on the comprehensive cost of production be made a legal entitlement of all farmers for all agricultural produce, sacking and arrest of Union Minister of State for Home Ajay Mishra in connection with Lakhimpur Kheri incident, withdrawal of cases against farmers and building of a memorial for those who lost their lives during the agitation.

Mishra's son was arrested in connection with the death of four protesting farmers in an incident in Lakhimpur Kheri in UP in October.

They also sought removal of penal provisions on farmers in the "Commission for Air Quality Management in the National Capital Region and Adjoining Areas Act 2021" and withdrawal the draft "Electricity Amendments Bill, 2020/2021" proposed by the government "Prime Minister, you have appealed to the farmers that now we should go back home. We want to assure you that we are not fond of sitting on the streets. We too desire that after resolving these other issues as soon as possible, we return to our homes, families and farming.

Seeking withdrawal of the three laws, agitating farmers from Punjab, Haryana and Uttar Pradesh are camping at three sites on Delhi's borders since November last year and have said they will stay put until all their demands are met.

Farmer leader Balbir Singh Rajewal said at a press conference at the Singhu border of Delhi, one of the anti-farm law protest sites, that the SKM will again hold a meeting on November 27 to decide the future course of action.

''We discussed the repeal of farm laws. SKM's pre-decided programmes will continue. Kisan panchayat will be held in Lucknow on November 22, gatherings at all borders on November 26 and march to Parliament on November 29," he said.

The opposition parties blamed the government for the situation, with Congress leader Rahul Gandhi saying that "people who have suffered false rhetoric are not ready to believe" the prime minister's words.

"It is absolutely clear that their heart is not clean, and after the elections, the bills will be brought again...

''This is the truth of those tendering false apologies to farmers. The farmers will bring a change in 2022," the SP said in a tweet.

"Who will take responsibility for 700 deaths that occurred during the farmers' protest? And the people are not believing this announcement. Several BJP leaders are claiming that the farm laws will be brought back after being repealed," he said.

Shiv Sena MP Sanjay Raut demanded that the kin of those killed during the farers' agitation be given financial assistance from the PM CARES Fund.

"The government has now realised its mistake and withdrawn the farm laws. There is a demand from different parts of the country that the kin of the farmers who lost their lives should be financially compensated," Raut said.

The opposition parties have put their weight behind the agitating farmers on the issue of Minimum Support Price also.

Bhartiya Kisan Union leader Rakesh Tikait urged the people to join 'MSP Adhikar Kisan Mahapanchaya' in Lucknow, seen as a show of strength by the unions.

In a tweet in Hindi, he said, "Chalo Lucknow, Chalo Lucknow (let us go to Lucknow) for MSP Adhikar Kisan Mahapanchayat. The agriculture reforms being talked about are fake and cosmetic.

"The farm reforms are not going to stop the plight of the farmers. The biggest reform for the farmers and agriculture will be to make a law on the MSP." Farmer leaders are also demanding the removal of Union Minister of State for Home Ajay Mishra.

"The prime minister has announced the repeal of the three farm laws, but he did not say when the MSP law will be made. Until a law is made on the MSP and Union Minister of State for Home Ajay Mishra is removed, the agitation will continue," Vice-president of Uttar Pradesh unit of BKU Harnam Singh Verma told PTI.

The Kisan Mahapanchayat in Uttar Pradesh capital assumes significance since the agriculture-dependent state will be going to polls early next year.

Lucknow Commissioner of Police D K Thakur said that elaborate security measures have been taken for the event to be held at Eco Garden.

Meanwhile, reports coming from various districts say that groups of farmers were heading to Lucknow to attend the mahapanchayat.

Sukhvinder Singh, the father of Gurvinder Singh who was among the four farmers killed in the Lakhimpur Kheri incident, said he would be present at the mahapanchayat along with other farmers.

President of Rashtriya Kisan Manch Shekhar Dixit, who along with his supporters will be participating in mahapanchayat, said that the sacrifice of hundreds of farmers will not be allowed to go in vain.

"Until all the demands of the protesting farmers are met, the agitation will continue," he said.