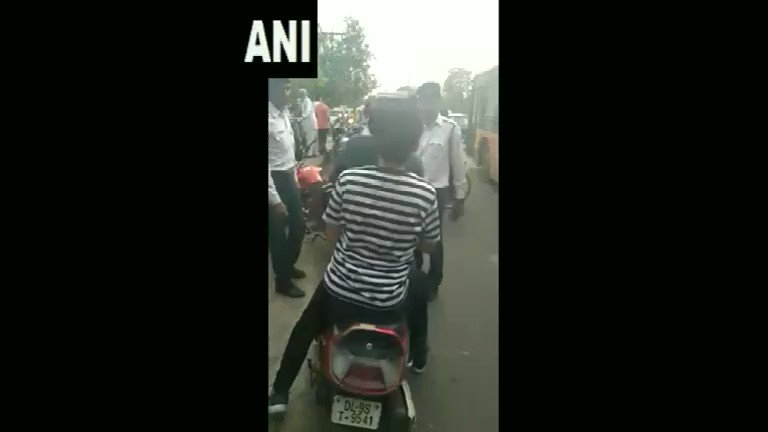 New Delhi: A woman and her friend were arrested for allegedly misbehaving with a traffic policeman after they were stopped for not wearing helmet in west Delhi's Mayapuri, police said Wednesday.

The man, identified as Anil Pandey, and his friend, Madhuri, were under the influence of alcohol, they said. The incident took place on Tuesday around 6.30 pm, police said.

A complaint was filed by the traffic policeman, following which a case was registered and the two were arrested, Deputy Commissioner of Police, (West) Monika Bhardwaj said.

In a video of the incident that has surfaced online, the woman, a pillion rider was seen getting off the scooter and misbehaving with the traffic policeman after they were stopped for not wearing helmet.

Madhuri was caught on camera pushing and shouting at the traffic policeman while he moved back a few steps as she kept pushing him away. In the footage, Madhuri was also heard saying that her brother died and had to reach at the earliest, however, police has denied about any such emergency.

While she was engaged in a verbal spat with the policeman, Pandey was trying to drive away. However, another policeman snatched the key and told him to stop the vehicle.

The woman again hit the traffic policemen and took away the keys out of his hand. The altercation also led to a traffic congestion in the area, following which the two got into arguments with passers-by as well, who asked them to make way.