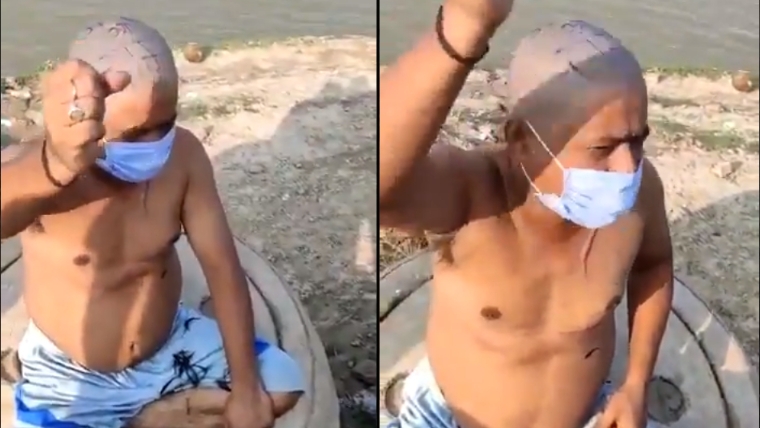 Members of a group forced a Nepali citizen to chant 'Jai Shri Ram' and slogans against Nepal Prime Minister K.P Oli. 'Jai Shri Ram' was also written on the man's scalp. The incident is reported from the city of Varanasi.

The group that calls themselves Vishwa Hindu Sena on Facebook, recorded and shared the video of the incident that made it go viral on social media. The Varanasi police have registered a case against Arun Pathak, the convenor, and other members of the group.

It is believed that the incident happened in the wake of PM Oli's controversial comment about the 'real' Ayodhya being in Nepal and not in Uttar Pradesh, India.

In the video, a topless man sitting on the river bank, is made to shout slogans like 'Hindustan Zindabad', 'Nepal Murdabad' and 'Jai Shri Ram'. The man who has 'Jai Shri Ram' written on his scalp was also forced to bring down Nepal and praise India for providing opportunities to Nepalis staying in India.

Pathak, on Facebook, urged his followers to write 'Jai Shri Ram' on the scalp of other Nepali men so that PM Oli "would not dare" to speak against Lord Ram.

Meanwhile, Varanasi police registered an FIR at Bhelupur police station on Friday and said necessary action was being taken.