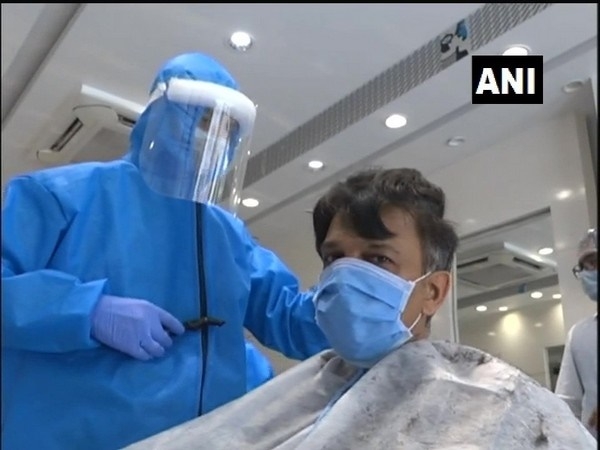 To show his elation after the Maharashtra government allowed reopening of salons and parlours, a 52-year-old Kolhapur-based salon owner used a pair of "gold scissors" to cut hair of his first customer in more than three months.

Under the 'Mission Begin Again', the government, in further easing of coronavirus-induced curbs in the state, allowed reopening of barber shops, salons and beauty parlours from June 28 but by adhering to a slew of protocols to avoid infection and spread of the deadly virus.

The decision came as a huge relief for owners and employees of these outlets whose business came to a halt after the lockdown was enforced in late March.

One of them was Rambhau Sankpal, who owns a salon in Kolhapur, around 250km from here. And to show his happiness, he welcomed his first customer by performing his hair cut using a pair of gold scissors on Sunday.

"It has been over three months now since the salon business in the state was badly hit due to the lockdown. Salon operators and workers were facing huge financial hardships as their income source dried up.

"There were instances where some barber shop owners ended their lives as they could not overcome financial crunch," said Sankpal while speaking to PTI.

He added that he and his son are into the same business for years now.

"We somehow managed to cope with the situation. Since the state government has now permitted reopening of salons, there was overall happiness on the faces on my fellow salon owners and I decided to express it in a unique way," he added.

Sankpal said while being in the business for last several years, he used his savings and bought a pair of gold scissors weighing10 tola.

There is a great demand for the precious metal-made scissor at 'mundan' ceremony of newborn babies, he said.

Sankpal said, "I used the gold scissor to cut hair of my first customer just to express happiness my trade people are experiencing and to celebrate the reopening up the business."

Sankpal said he is taking all precautions, as mandated by the government, while catering to his customers like ensuring they wear masks and sanitise hands.

"We also sanitise seats before and after they are used by customers to maintain hygiene," he added.