Rajasthan CM Ashok Gehlot said that this is the first Governor House in the country that will have Constitution Park open to the public.

President Doupadi Mumru, CM Ashok Gehlot, and Governor Kalraj Mishra at the launch of the constitution park. | Manish Godha
Follow us on

The Governor House of Rajasthan now has the Constitution Park built in premises of his house. The historical journey of the making of the Indian Constitution till its implementation has been showcased in the park through various sculptures, photographs, models and other artistic forms. The park is open to the public.

President Droupadi Murmu inaugurated this park in the presence of Governor Kalraj Mishra and CM Ashok Gehlot on Tuesday.
Murmu appreciated the artists for their description of the historical journey of three years of Constitution making artistically. She said that a major chapter of our modern history is presented at the Park through elegant paintings, sculptures and other art forms. President Mumu, along with CM Gehlot, looking at archived pictures of Constituent assembly in the park at Rajasthan governor's house. | Manish Godha

Got an opportunity to pay respect to makers of constitution: Prez Murmu

The President said that our democracy is vibrant and the largest in the world. Our Constitution is the foundation of this great democracy. She said that by participating in this function, she got an opportunity to pay her respects to the makers of the Constitution. She paid tributes to the architects of the Constitution of India on behalf of the grateful nation.
The man behind this Park is the Governor of Rajasthan Kalraj Mishra who laid the foundation of this park on Republic Day last year and the government agency Jaipur Development Authority has completed the work in less than one year.

Mishra said ‘the Governor is the constitutional head of a state and I want people to come here to get the knowledge of our constitution which is the guiding tool to run our country.’

Rajasthan CM Ashok Gehlot said that this is the first Governor House in the country that will have Constitution Park open to the public. 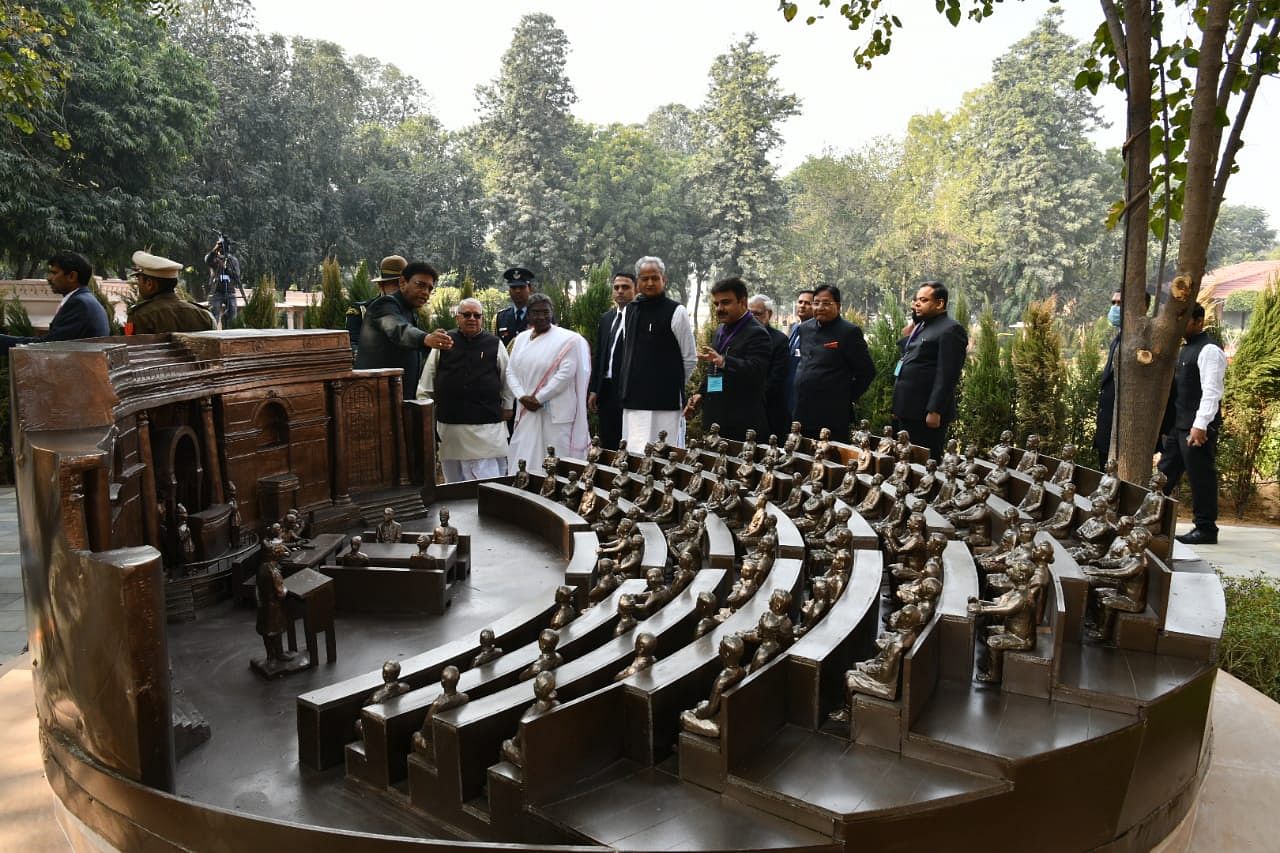 A journey of the Constitution

Along with the artistic presentation of 22 parts of the constitution, the preamble and the basic duties, the major attraction of the park is the cover of the Constitution book which is made of black stone with brass carving on it.

Among the other attractions are the statues of Father of the Nation Mahatma Gandhi spinning the spinning wheel, a rare image of Maharana Pratap, the symbol of bravery in the posture of rest with his beloved horse Chetak. This white marble statue has been named 'Vishranti'.