The Chairman issued Show Cause notice to the Editor of the Telegraph for violation of Norm 17 (i)(a)(b) and 31 (vi) of Norms of Journalist Conduct.
FPJ Web Desk 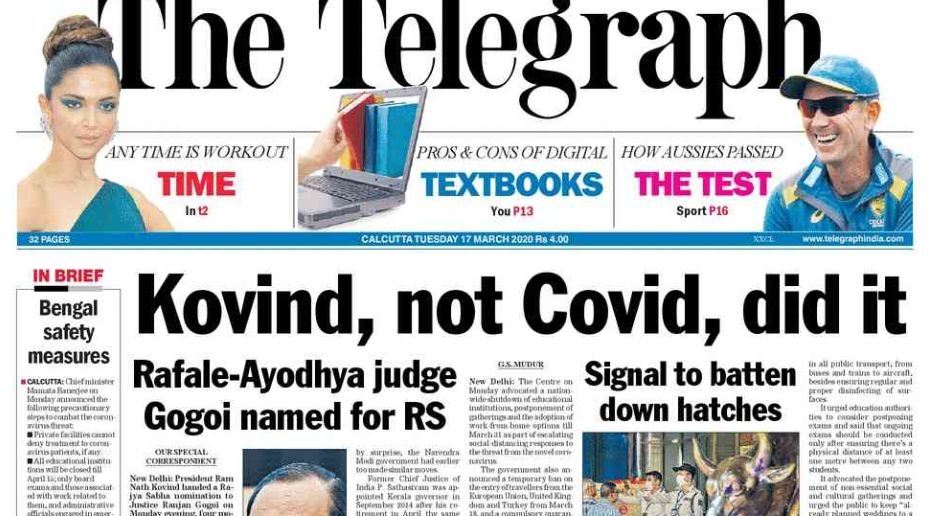 The Telegraph – the beloved of the liberal Twitterati – fell foul of the Press Council of India for its pun on the President of India.

The Kolkata-based newspaper had published an article on Ranjan Gogoi’s nomination to Rajya Sabha which had the heading: “Kovind, not Covid, did it.”

The notice read that the PCI Chairman, Justice Chandramauli Kumar Prasad noted with concern the 'satirical use of the name of the Hon'ble President of India in the news headline of the Telegraph in its front-page reportage on its issue dated 17/03/2020.

The Chairman issued Show Cause notice to the Editor of the Telegraph for violation of Norm 17 (i)(a)(b) and 31 (vi) of Norms of Journalist Conduct.

It further said: "... prima facie is of the opinion that satirical comments, ridiculing and denigrating the first citizen of the country is uncalled for and beyond the call of fair journalistic comment."

A row erupted on Tuesday over Gogoi's nomination to Rajya Sabha with the Congress and other Opposition parties alleging that the "brazen action" by the government subsumes the independence of the judiciary.

Gogoi retired last November and said he will speak in detail

Gogoi, who retired in November last year, said he would speak in detail about accepting the nomination after he takes oath.

Gogoi, however, said he will speak in detail about the issue, over which he and the Modi government have come under attack, after taking oath as a member of the Rajya Sabha.

"I have accepted the offer of the nomination to the Rajya Sabha because of strong conviction that the legislature and judiciary must, at some point of time, work together for nation-building.

"My presence in Parliament will be an opportunity to project the views of the judiciary before the legislature and vice versa," he told an Assamese news channel.

President Ram Nath Kovind had nominated Gogoi to the Upper House of Parliament on Monday.

The Press Council of India was first set up in the year 1966 by the Parliament on the recommendations of the First Press Commission with the object of preserving the freedom of the press and of maintaining and improving the standards of press in India.