Portals of Kedarnath Temple closed for winters at 8 am today

As per the Devasthanam Management Board, over two lakh devotees have visited the four shrines this year till October 22.
ANI 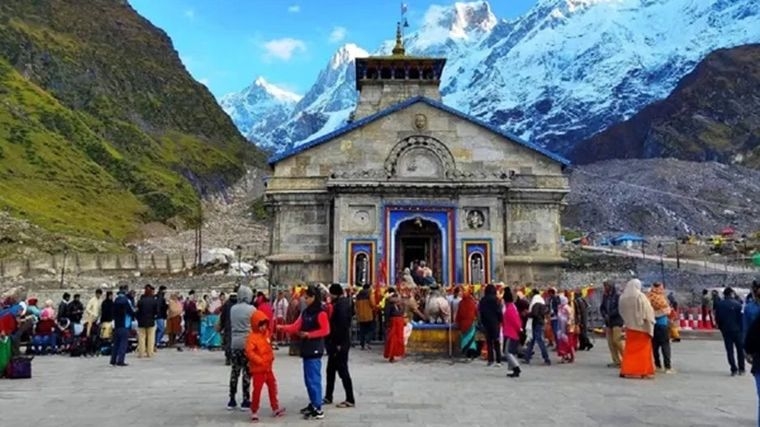 Rudraprayag: The portals of Kedarnath Temple in Uttarakhand closed for winters for six months on Saturday at 8 am.

Located on the bank of the Mandakini river, Kedarnath Temple is the of the four ancient pilgrimage sites referred to as 'Char Dham' which also include Yamunotri, Gangotri and Badrinath. Built in the eighth century AD by Jagad Guru Adi Shankaracharya, Kedarnath Temple is dedicated to Lord Shiva.

The portals of Yamunotri will also close for winters today and will remain shut for the next six months.

As per officials of Uttarakhand Char Dham Devasthanam Management Board, Badrinath Temple will close on November 20.

Meanwhile, the portals of the Gangotri shrine closed on Friday at 11.45 am after priests performed religious rituals. A large number of pilgrims and local people were present to witness the ceremony. The Utsav Doli (palanquin) of Maa Ganga of the Gangotri shrine left for her winter abode at Mukhba, following the closure of portals of Gangotri for the next six months, and will reach there today on the occasion of Bhai Dooj.

District Magistrate of Uttarkashi Mayur Dixit in an official statement informed that during this year, more than 32,948 pilgrims visited Gangotri Dham.

As per the Devasthanam Management Board, over two lakh devotees have visited the four shrines this year till October 22.

Char Dhams, which draw lakhs of tourists and devotees every year from across the country and abroad, are closed every year in winters due to heavy snowfall in the region.