Terming the Citizenship Amendment Act as "discriminatory", Tharoor asserted that it is against the ideals of unity espoused by Mahatma Gandhi.
PTI 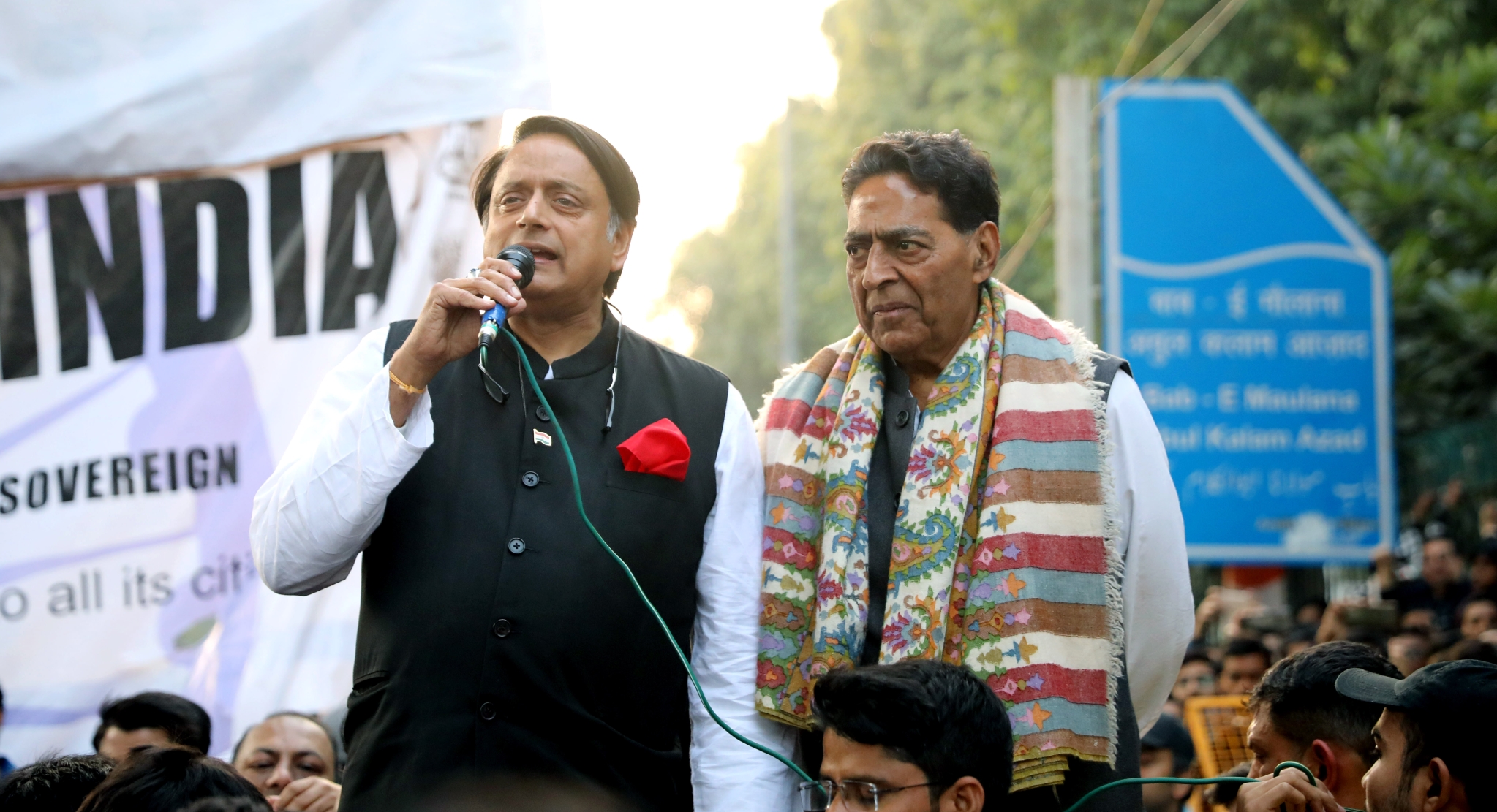 Expressing solidarity with Jamia Millia Islamia students, protesting against recent changes in the citizenship law, Congress leader Shashi Tharoor on Sunday said the December 15 police action against them is a "blot on the nation".

Terming the Citizenship Amendment Act as "discriminatory", Tharoor asserted that it is against the ideals of unity espoused by Mahatma Gandhi. "Whatever happened on December 15, is a blot on nation. Without any provocation, without any intimation to the vice chancellor, they (police) entered hostels and attacked women students. Students studying in library were attacked, which is a 'shame, shame, shame' and not acceptable at all," he told the cheering crowd.

Attacking the CAA, the Thiruvananthapuram MP said the Centre's step is discriminatory and an effort to marginalise "one community".

"What has been done by the government is discriminatory and is an effort to marginalise one community in India. That is why we had opposed the introduction of the bill in the Parliament, as it brought for the first time religion in the Citizenship Act," he said.

Tharoor said he does not want any section of fellow citizens to be reduced to the second class of citizens.

"We shall stand for the values we cherish and for the humanity and above all we should stand up for Bharat (India)," he added.

Tharoor, who addressed the crowd in Hindi and English said, "Religion was no where mentioned in the Citizenship Act until the BJP-led government incorporated it in the CAA. This is not something we can accept." "The CAA is betrayal to ideals of Mahatama Gandhi, who sacrificed his life for the unity of the nation; to the unity of Hindus and Muslims. India, which Mahatma Gandhi wanted to see, will not be the India after the introduction of religion in the CAA," he said.

Addressing hundreds of protestors, Tharoor said though he was in Kerala on December 15, when police had barged into the varsity, he had expressed solidarity with protesting students and wanted to meet them on reaching Delhi.

"Altough I was in Kerala, I showed my solidarity with you but after coming to Delhi, I wanted to meet you all and tell you that we are all with you and on this issue, we will always be with you," he said.

Tharoor also recited a couplet in Hindi saying, "Na mera hai, na tera hai... Yeh Hindustan sabka hai... na samjhenge yeh baat toh nuksan sab ka hai.. (It doesn't belong to either me or you.. India belongs to everyone and if you don't understand it, the loss will be of everyone).

Tharoor, who visited Jamia students was along with Delhi Pradesh Congress Committee president Subhash Chopra claimed after the introduction of religion in CAA, it will be followed in all-India National Register of Citizens, which unfortunately puts the onus on one community to prove its citizenship.

"That is not the India that our founding fathers wanted to see, that is not the India that people in Congress party, including myself, would ever like to accept. We want India, where every one is equal. It should not matter whether you are a Muslim or Hindu, a Christian or Sikh. If you are Indian, you have same rights and same privileges," he said.

Tharoor said every one in this country has given blood and sacrificed their lives for the unity of India.

"Don't let anyone tell you that you have lesser rights than anyone else has in this country. You have the same rights as a Muslim or a Hindu or Christian. That is India, the republic of India, the India of the Constitution," he asserted.

Remembering poet Muhammad Iqbal, with his statute standing tall nearby on the varsity campus, Tharoor recited his famous poem, "Mazhab nahin sikhata apas men bair rakhna... Hindi hain hum, watan hai Hindustaan hamara.. (Religion does not teach us animosity... We all are of Hind, Hindustan is our homeland)."

Encouraging the protesting students, Tharoor said, "I only want to say this, I can see this, you are the hope of the nation. These students, who are standing outside spontaneously..for the country these students, teachers and ordinary citizens have stood up and said, we will now stand together".

He said students studying in the University should always remember that Jamia Millia Islamia was a seat to the proud resistance to the British and Mahatama Gandhi came here and started Khilafat Movement, which was a spirit of Hindu-Muslim unity.

"You all should know that when Gandhi came here, he had said Jamia should continue fighting and if it needs money, I will go with a begging bowl and I will save Jamia. Today Jamia is one of the great universities of our country," he said.

On December 15, the police had barged into the varsity library and allegedly used force against students protesting against the Citizenship Amendment Act.

Hundreds of students, teachers and local people have been protesting outside the gate number 7 of the varsity, which has become a site of protest against the police action since then.