Modi said that Maharaja Ranjit Singh worked to conserve the country's heritage, and Jallianwala Bagh is witness to the sacrifice made by the Sikh brothers and sisters
PTI Stating that the dangers against which the Sikh gurus had alerted people during their lifetime continue to exist even today, Prime Minister Narendra Modi on Saturday stressed the need to stay united and urged people to ensure that nobody is able to harm the country's unity.

Addressing the Gurpurab celebrations of Guru Nanak Dev Ji at Gurudwara Lakhpat Sahib in Gujarat's Kutch via video conferencing, Modi listed the contribution of Sikh gurus, which he said is not just limited to society and spirituality.

Modi's appeal during his address to the Sikh community comes two days after a blast took place in Punjab's Ludhiana district court complex that killed one person and left six others injured.

"It is our responsibility to ensure that in such an important period, nobody hurts our dreams and unity of the country. To achieve the dreams for which our gurus lived and sacrificed their lives, we should all remain united. Unity is essential for us all," Modi said.

"The dangers against which the gurus alerted us remain the same even today, so we have to be cautious and ensure the security of the country. I am sure that with the blessings of Guru Nanak Dev ji, we will surely fulfil our commitment, and the country will reach new heights," he said.

Guru Nanak Dev ji and other gurus not only kept the consciousness of India ignited, but also made a way to keep the country safe from external attacks and atrocities that were breaking people's morale at that time, the PM added.

"The contribution of our gurus is not limited to society and spirituality alone. Rather, if our nation, its consciousness, faith and integrity are safe today, then at its core is the great penance of the Sikh gurus," he said.

The Sikh gurus never hesitated to put their lives at risk to protect India against foreign attackers. "Guru Tegh Bahadur's valour and his sacrifice against Aurangzeb teaches us how the country fights against terror and religious fanaticism," he said.

"Similarly, the life of the tenth guru, Guru Gobind Singh Sahib, is also a living example of tenacity and sacrifice at every step," he said, adding that the gurus took on the strongest rulers of their times, and thousands of people sacrifices their lives to stop the attacks of Nader Shah and Ahmad Shah Abdali.

Modi said that Maharaja Ranjit Singh worked to conserve the country's heritage, and Jallianwala Bagh is witness to the sacrifice made by the Sikh brothers and sisters, who fought with valour for the country's independence from the British rule.

"Today, when the country is taking inspiration from its struggle for independence, from its past, at such a time, ideals of our gurus become even more important. Behind all the efforts taken by the country and its commitments are dreams that it has been waiting for to fulfil," he said.

He said that efforts have been made at every level for the message of Guru Nanak Dev ji to reach the whole world with new energy. "The Kartarpur Sahib Corridor which was awaited for decades, in 2019 only our government completed its construction," he said.

More recently, the country was successful in bringing the respected Guru Granth Sahib from Afghanistan to India, Modi said.

He also recalled bringing a small sword with the name of Guru Hargobind Ji written in Persian from America during his visit a few months ago, along with more than 150 historical objects that were returned by the US to India.

"It has always been a matter of pride for Gujarat that the fourth Gursikh (of Panj Pyare) Bhai Mohkam Singh ji, was from Gujarat, who played an important role in the establishment of the Khalsa Panth. Gurdwara Bet Dwarka Bhai Mohkam Singh has been built in his memory in Devbhoomi Dwarka," he said.

Every year, from December 23 to 25, Sikh Sangat of Gujarat celebrate the Gurpurab of Guru Nanak Dev Ji at Gurudwara Lakhpat Sahib, where he had stayed during the course of his travels, and which has his relics, including wooden footwear and palkhi (cradle) as well as manuscripts and markings scripts of Gurmukhi.

The Gurdwara had suffered damages during the 2001 earthquake. Modi, as chief minister of Gujarat, had undertaken efforts to ensure repair of the damages. 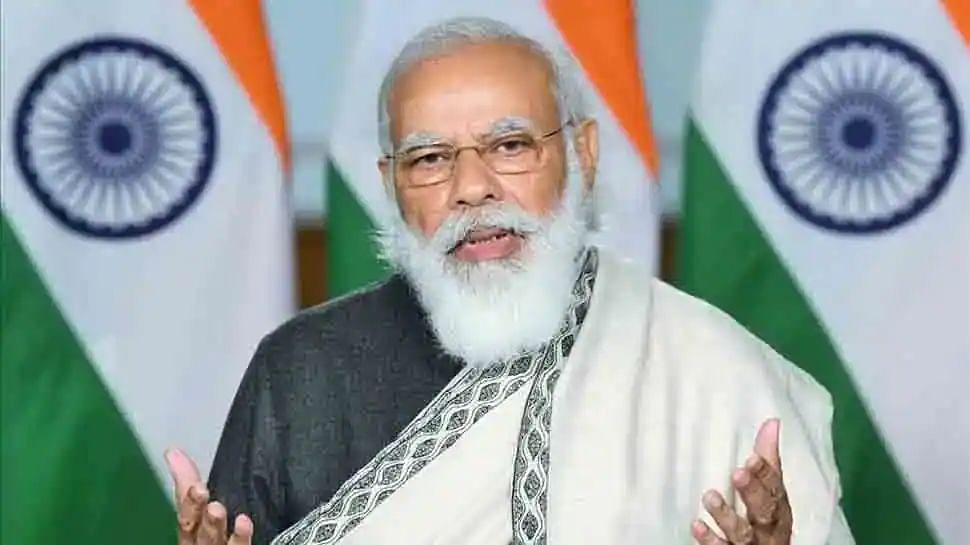