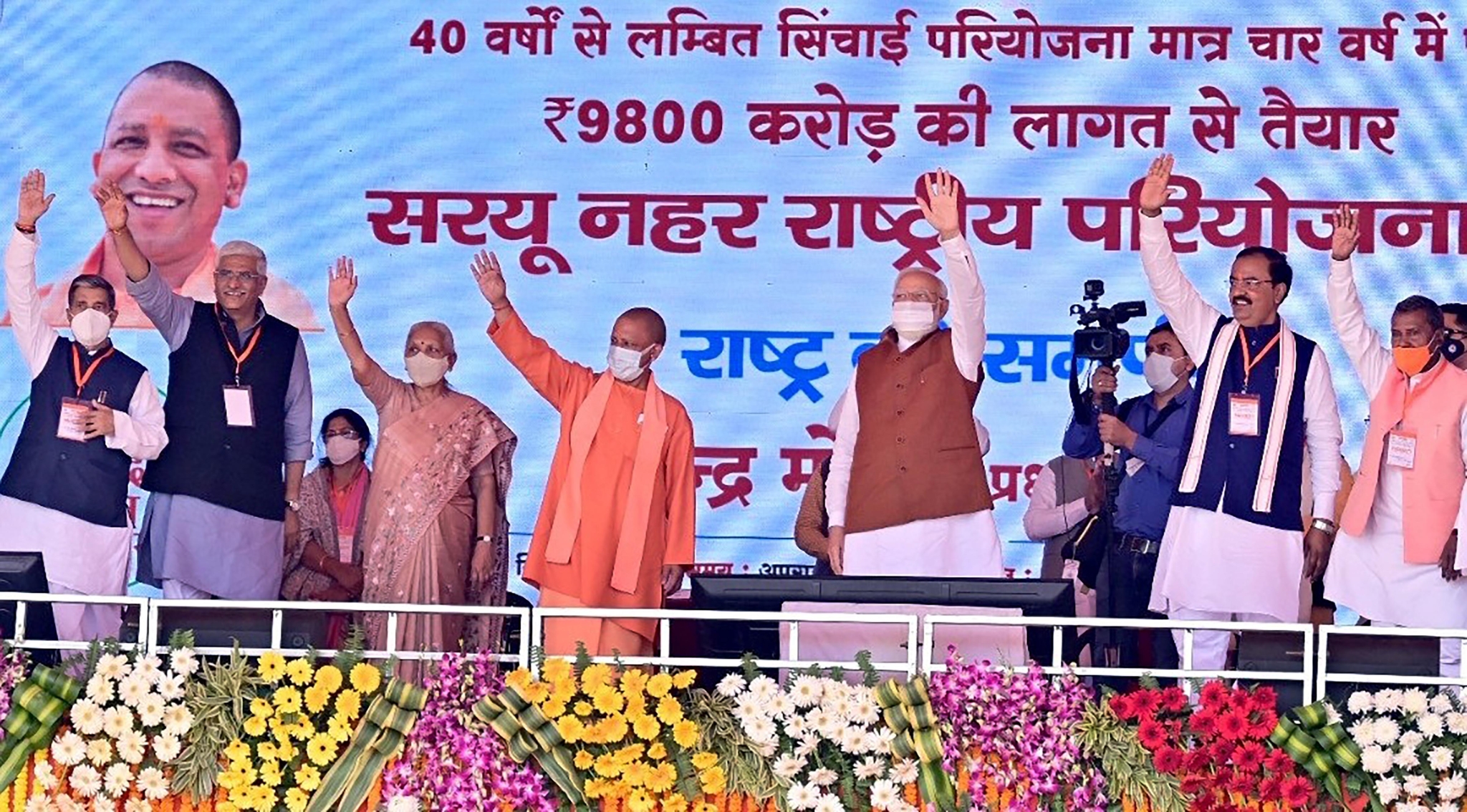 Balrampur: Prime Minister Narendra Modi during the inauguration of the Saryu Nahar National Project, ahead of UP Assembly elections 2022, in Balrampur district, Saturday, Dec. 11, 2021. UP CM Yogi Adityanath is also seen. | (PTI Photo)

Lucknow: After a long delay of 44 years, the ambitious Saryu Canal project covering nine districts of Uttar Pradesh has been completed. On Saturday, Prime Minister Narendra Modi dedicated this biggest canal project of independent India to the people at a function in Balrampur district of UP.

While addressing a meeting on this occasion, PM Modi mocked at the opposition over the delay in this project and said that BJP government completed its work in five years, which the previous governments could not do in five decades. This happened because of the double engine government which accelerated the pace of work on this project, he said.

On the tall claims of opposition parties about various projects inaugurated recently being started by it, Modi said there are few people who have this habit of taking credit of everything. "When I started from Delhi to Balrampur today, it came to my mind that few people would come forward taking credit of this project. They could have started this project during childhood," mocked PM Modi.

Pointing at the cost escalation of the Saryu Canal project due to the delay, Modi said that initially, it was Rs 100 crore only which has now become Rs 10,000 crores. He said that completion of this project is a reflection of honest thinking of BJP-ruled UP government. He said that some 50 years back work on this project had started but it could be completed during Yogi’s tenure.

It may be mentioned that the Saryu Canal project would cover 14 lakh hectare of agricultural land in nine districts of Awadh region of UP. This Saryu canal will begin from Balrampur and cover Behraich, Shravasti, Gonda, Siddharthnagar, Basti, Santkabirnagar, Mahrajganj and Gorakhpur districts.

The chief minister Yogi Adityanath said that more than 40 lakh farmers in this region would be benefitted from this project. He said that the project was conceptualized in 1972 and work had begun in 1978. However, till 2017 only 52 per cent work on this project was completed the remaining 48 was carried during his tenure, said UP CM. He informed that the cost of country’s biggest Saryu Canal project is Rs 9802 crore.